LOS ANGELES (AFP) — Lindsay Lohan has withdrawn from an upcoming movie about convicted murderer Charles Manson, her publicist said Friday, following an Internet report she had been axed from the project.

The 21-year-old actress was due to play Manson family follower Nancy Pitman in the film "Manson Girls", but has pulled out of the production because of scheduling conflicts, spokeswoman Leslie Sloane said.

"She is not able to do the film as she has signed on to the film 'Labor Pains' and the TV show 'Ugly Betty' and the dates conflict," Sloane confirmed in an email to AFP. "She was interested in Manson if her schedule permitted."

News of Lohan's withdrawal from "Manson Girls" came as the respected movie industry blog, deadlinehollywooddaily.com reported that the actress had been dumped because other actors refused to work with her.

Lohan, regarded as one of Hollywood's brightest young actresses, has seen her career falter in recent years amid a string of personal problems which have included arrests for drink-driving, drug possession and a stint in rehab.

Her last movie was last summer's box-office flop "I Know Who Killed Me", which suffered a critical mauling and earned Lohan two awards at the Razzies, the annual parody of the Oscars that honors the worst of Hollywood.

Lohan has also been criticized in the past for her performance on set, with the producer of 2007 film "Georgia Rule", James G. Robinson infamously blasting her in a letter for her repeated late arrivals and absence from the set.

Robinson described Lohan's behavior as "discourteous, irresponsible and unprofessional," and accused the starlet of acting "like a spoiled child."

Brenda sits in the operator’s seat of the EARTH MOVER, fiddles around with the controls, while her latest boyfriend, Michael Montfort, stands below looking impatient.

I thought you said you knew how to work this
thing!
BRENDA
This one’s kind’a big, okay?!

INSERT ON CONTROLS – as Brenda pushes a button, making THE ENGINE TURN OVER and START UP..

BRENDA
Just hold on, goddamnit! I’m doing the best I can!

MICHAEL
Just hurry the fuck up!

Brenda pulls one of thirty levers.

WIDER – as the SHOVEL lurches upward.

Suddenly the entire area is lit up by intensely bright light.

ANOTHER ANGLE – Brenda and Michael are illuminated by a bunch of COP LIGHTS.
Two COPS put Michael in handcuffs.

ANOTHER ANGLE – as a handcuffed Brenda is brought around to the rear of the Chevy as another COP pops the trunk.

INSERT ON TRUNK – the BODIES of TWO MEN are stuffed into the trunk.

COP O.S.
Looks like they were killed with a shotgun...

BACK TO SCENE
COP
(to Brenda)
What, you were just gonna bury these guys on
the side of the road?

ANOTHER ANGLE – as a barely breathing MAN is pulled from the trunk and laid on the ground.

Brenda and Michael Montfort sit at the kitchen table with their hands cuffed behind their backs, while COPS move in and out all over the place.

COP O.S.
(calling)
Got something here!

A bunch of COPS have set up lights and are digging in the dirt.

ANGLE ON DIRT – as a WOMAN’S HAND with the same DISTINCTIVE TATTOOS as the woman seen cutting speed with Brenda and Michael is uncovered.

ANOTHER COP O.S.
We’ve got a body down here... Looks pretty
fresh... 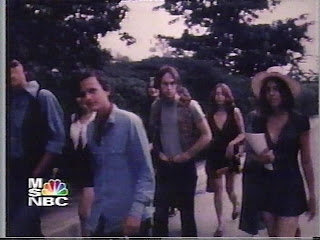 Altogether, because of a technicality, I ended
up serving a little over three years for being an
accessory after the fact to four murders, while
Michael got life...

Nice move, Lindsay! "HE did not break up with ME, really, I broke up with him FIRST!" Score one for being the leave-er, not the leave-ee. Um, yeah. "Ugly Betty" and "Baby Mama Copycat" vs. this movie travesty; good call there, too.