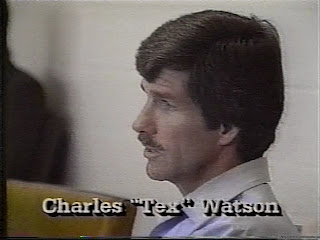 In the 1990’s and early 2000s, the late Russell W. “Bill” Nelson wrote tabloid-like stories about former members of the Manson family. He led a search party to Barker Ranch on rumors of bodies made by a man named Larry Milton (MELTON, the PERVERTED PEDOPHILE), who claimed he had been a former Manson family member. No bodies were found, but he continued to stalk the families and children of former Manson family members like myself. His agenda was vengeance and to seek self-aggrandizement.

On March 16, 2008, in an article entitled, “Oak Ridge scientist help tests for bodies in Manson ranch”, Associated Press writer Juliana Barbassa stated: “Manson follower Susan Atkins boasted to her cell mate on November 1, 1969, that there were ‘three people out in the desert that they done in.’” It seems that Susan’s agenda was to boast in pride to her cell mate, but I agree with Debra Tate: “If there are bodies here,” she said at Barker ranch, “we need to find them and send them home.” I’d like to hear what Susan Atkins has to say today, about what she said in 1969? [I hear only through the media concerning former Manson family members.]

What is the agenda? Is it to write books for personal gain? Is it to hype the Manson murders in the press before parole hearings? Or, is it so families of possible victims can find closure? If it is the later, let’s dig with much skepticism. I know of no bodies

He mentions later on two members of the Family who remain devoted to Charlie. Squeaky and Sandy? Or who?

Email ThisBlogThis!Share to TwitterShare to FacebookShare to Pinterest
Labels: Tex

tex watson what a waste of good clean air to keep his rotton corpse breathing.

I presume this was written just before the story about Squeaky's apostasy.... so perhaps "scratch one redhead", leaving one remaining loyal follower?

OR is Squeaky simply "cooperating" by telling the authorities what Watson is saying here: zip, zilch, nil, nada bodies at Barker?

How the heck would Watson know, who is loyal and who is not? Nobody writes to his sorry *ss except for the mentally impaired Xians whom he has swindled into giving money for his commissary fund -- um, I mean, prison ministry.

And how would he know anything about Barker Ranch, either, since he was at home, cowering beneath his parents' bed? His endorsement (if one may call it that) is worthless.

I think the most interesting thing Tex says is this: I’d like to hear what Susan Atkins has to say today, about what she said in 1969? We would too!

You know, I can't believe Susan has never been asked about her comments regarding three bodies out in the desert in any of her parole hearings. All you people with access to the hearing transcripts...any ideas?