I guess none of us know what has happened with the good Col, and I guess all of us hope that he is well (even if he does curse us for being interfering busybodies).

And I also guess none of us - especially the Col - want the blog to die, so here's a suggestion that we mere mortals keep a dialogue going in his (hopefully temporary) absence.

So forgive me taking the initiative - and if anyone has anthing of interest to say - or news of the Col - please post here.

And I hope I don't get shot out of the sky for abusing my privileges like this ...

Umm, He Admits What He Did and Doesn't Blame Charlie 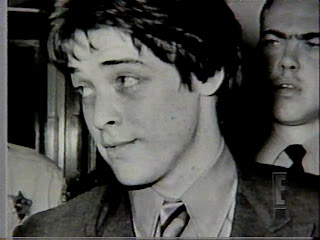 Over at the best damn Manson site, Bret, who you know I love, goes into a rant about Bobby not admitting responsibility and being full of shit. Then he publishes Bobby's last Parole transcript.

`Statement of Facts' - on the night of Friday, July 25, 1969, approximately 45 hours prior to the fatal stabbing of the victim, Gary Hinman, Robert Beausoleil went to Hinman's residence to buy drugs. Hinman was, at that time, dealing Mesculine that he made himself. Beausoleil was buying drugs on behalf of members of the Straight Satan's Motorcycle club who had supplied money for the purchase in the amount of $1,000. Danny DeCarlo, who would later testify as a witness to Beausoleil, was a member of the Straight Satan's club and an active participant in the drug transaction. Beausoleil delivered the mesaculine he had purchased from Gary to the Straight Satan's at Spahn Ranch where Danny DeCarlo resided with his girlfriend, Susan Atkins, who would become co-defendant in Beausoleil's case.

DeCarlo and other members of the Straight Satans then took the drugs to Venice Beach for a party involving several motorcycle clubs that was to take place the next day. On Saturday, July 26th, DeCarlo and other members of the Straight Satans, accompanied by members of the Satan's Sley and Hell's Angels motorcycle clubs, returned to Spahn Ranch and confronted Beausoleil. They accused Beausoleil of conspiring with Hinman to burn him for the money for selling them bad drugs. The bikers roughed up Beausoleil and threatened him with a knife. Beausoleil told the bikers that he did know the drugs were bad and promised to get their money back from Hinman.

DeCarlo and co-defendant, Bruce Davis, told Beausoleil that they would drive him to Hinman's residence to make sure that he did. Two young women, co-defendants Atkins and Mary Brunner, who were initially unaware of the difficulites between Beausoleil and the bikers and Hinman, came along "for the ride." Upon arrival at the Hinman residence, Brunner and Atkins went ahead into the house to visit Hinman with whom they had more then casual relationships. Davis then gave Beausoleil a 9mm pistol. Davis and DeCarlo instructed Beausoleil to keep the gun concealed, but to produce it if Hinman failed to cooperate and return the money. They told Beausoleil to phone them at the Ranch when they obtained the money and they would return to pick him up. Davis and DeCarlo then left with the car. In addition, Beausoleil was carrying a knife in a sheath on his belt.

Beausoleil confronted Hinman about the allegedly bad drugs and commanded the return of the $1000.00 he had given him the day before. Hinman claimed that the mesculane was not bad, and in any case that he had already spent the money. Beausoleil became agitated and pulled the gun out and threatened Hinman with it. He struck Hinman with the gun two or three times. Hinman produced his checkbook to prove that he had already spent the money. Convinced that Hinman was telling the truth, Beausoleil handed the gun to Atkins and told her to keep in trained on Hinman and not to let him move, that he was going to go into the other room in search of something of value that he could give to the Straight Satans in lieu of the money.

While Beausoleil was out of the room, Hinman lunged at Atkins and took the gun away. Atkins cried out and Beausoleil ran back into the room. He grabbed Hinman's arm and began to fight with Hinman to gain possession of the gun. While the two men were wrestling over the gun, one of the two female co-defendants telephoned Spahn Ranch and apparently and unidentified person that there was trouble, that Hinman had taken the gun and that he and Beausoleil were fighting over it. During the struggle the gun discharged. The bullet pierced the kitchen sink without injuring anyone, but the sudden shock of the gun's loud concussion enabled Beausoleil to regain possession of the gun. Hinman offered to resolve the conflict by signing over the two titles for the two old automobiles that he owned, one of which was a dented volkswagon van that Hinman had recently purchased for $800.00. Beausoleil accepted.

When the transfer of the titles was complete Beausoleil and the two females were preparing to leave when co-defendants Davis and Charles Manson appeared at the front door. Hinman, who was no longer being held at gunpoint opened the front door for the two men who he considered to be his friends. Manson immediately slashed Hinman across the check with a long sword­like knife taking Hinman's ear and cutting his cheek. Beausoleil asked Manson why hedid that and Manson replied that he was showing Beausoleil, "how to be a man." Davis demanded Hinman give him the gun and Hinman indicated to Davis that Beausoleil had the gun. Beausoleil returned the gun to Davis and Davis expressed annoyance that the gun had been jammed. Manson angrily told Beausoleil that he had made a mess of things and that he needed to get it cleaned up. He told the two females, who were members of his commune, to help Beausoleil take care of Hinman. Manson and Davis then left.

Beausoleil spent the rest of the night, and most of the next day, with Hinman, attending to his injury and talking to him in an attempt to convince Hinman that - "

There seems to be a typographical error

"In an attempt to convince Hinman that the wound was not very serious and would heal without the need of going to see his doctor. Beausoleil feared Hinman would inform on him if he went to the hospital for medical treatment. Hinman became increasingly adamant about wanting to get professional treatment for the injury.

Beausoleil phoned Spahn Ranch for advice on what to do. Manson came to the phone and told Beausoleil that he was on his own and hung up. Hinman made additional demands to be allowed to go to the hospital. In a state of panic and desperation Beausoleil made the decision to kill Hinman to prevent him from telling what he knew of Beausoleil's involvement of the drug deal and the assault. Beausoleil stabbed Hinman once in the chest and when Hinman did not immediately fall he stabbed him a second time.

In court testimony the coroner said that the second stab wound was almost instantly fatal. Beausoleil has stated that neither of the two female co-defendants had any

foreknowledge of the fatal assault and were out of the room when it occurred. The females had seemed shocked. Beausoleil asked them to help him remove evidence of their presence and to take measures that might help him evade detection by the authorities. Hinman was known to associate frequently with radical militant (indiscernible) on the USLA campus and Beausoleil decided to try to make it look

as though Hinman had been killed by some of these other associates by burning some of Hinman's Marxist newspapers on the floor, and by drawing 'political pig' on the wall in the victim's blood. The three left Hinman's residence at nightfall on Sunday, July 27th.

DeCarlo and members of the Straight Satans accepted the old VW van as re­payment for the allegedly bad drugs and took it to Venice Beach. It was subsequently found in Santa Monica. Beausoleil was arrested in San Louis Obispo on August 6th. He had been driving Hinman's other vehicle at the time and it had broken down on the freeway. The knife used in the slaying of Hinman was in the vehicle."

This of course matches what he always tells us.


INMATE BEAUSOLEIL: Well, of course in my testimony in the court statement that you read, Charles Manson did not kill Gary Hinman, I did. He did wound him with the sword as I've said

over and over, and as it states in the statement of facts. I am totally responsible for making the decision to kill Gary, although I will say that I was goated into it and made to believe I would not be accepted if I didn't. I'm ashamed to say that that overrode my ethical and moral upbringing in that instance. Gary Hinman was not tortured. I'm not really sure because I don't remember specific testimony as was stated, but I suppose (indiscernible) actually there maybe I just didn't hear it.

The District Attorney who prosecuted the case said that the fact that I had hit Gary with the gun and that Manson had slashed his face causing a cut to his face and - actually it was a cut to his ear, it wasn't severed -constituted torture. The fact that I did not let him go to the hospital when he asked would in my opinion constitute some form of pain that might be construed as torture. What I do what to say about that is that I did not deliberately stand over him and inflict any kind of pain as seem to be implied in (indiscernible) Sherry, or someone, said they overheard a conversation between some people. I did want to clarify that point.

I don't know what else to say other then to re-iterate the statement of facts and answer as necessary - and answer any questions that you have, if you have any that are specific.

Sorry Bret, you are a God and all, but this is a mistake- HE DOES admit that he did it.

More News Has Been Requested

I didn't think any of you cared anymore.
I was asked for more news.
Okay here is some video news.
Debra Tate is now a wide load.

Yes Debra. The old short guy is afraid to face you. Because you might eat him.
Posted by ColScott at 9:52 PM 12 comments: