Dave Grohl announced today at the Sundance Film Festival that he almost put Charles Manson in his Sound City documentary. “Manson recorded at Sound City and at one point we considered talking to him about music because how

f***ing insane would that be,” said first time director Grohl Tuesday. “But we decided not to because we didn’t want it to take over the beautiful message of the movie but we considered it.” The murderous cult leader recorded some demos in the late Sixties at the famed San Fernando Valley recording studio that’s the subject of the Foo Fighters’ frontman’s directorial debut. Found guilty of the murder of Sharon Tate and others in 1970, Manson has been in prison ever since. He has repeatedly been denied parole. “He was a musician before he got busted. He was friends with Dennis Wilson of the Beach Boys and Dennis Wilson said ‘here go record some demos, I’ll pay for it, there’s this place called Sound City,” Grohl explained. A

Over at EvilLiz they are linking to THE VINCENT BUGLIOSI STORY by George Denny. It is also at Cat's site.  I am fairly certain that this thing originated with the Col.  I bought several years back a big trove of Trial Transcripts and stuff like that.  I had a relative, NYPD, pick it up and ship it to me.  That was crazy because he found a plugged gun in the boxes!  I still wonder what that was about.

Anyway, we analyzed some of the transcripts and I was faced with a dilemma.  You see, BUG is still a lawyer and if this shit was made up, I really didn't need a lawsuit.  So I tried to get Denny's permission and verification but it turned out he was dead.  So I dug up the LA Times articles and we started running those.  This was back when I was breaking news like this fairly regularly and the fact that BUG was a milkman stalker and girlfriend beater was pretty explosive.

All that stuff is in storage now but Matt has inspired me to get it scanned and prepared for upload, so I will.

Why don't I break more stories like this?  Well because I just don't care enough these days.  I desperately seek the motive, like all of you.  But I think it may die with Charlie.

Have any of you seen this?  A special site all set up to walk you through BUG's lies and deceit?  I guess no one else is worried about his lawsuit potential.

He Wasn't Interesting Enough For His Own Movie

EXCLUSIVE: James Franco, bound for Sundance to promote several projects, has just set another. He will star in and direct Beautiful People, a bio-pic of charismatic playboy and visionary Jay Sebring, the jet-setting hairstylist to the stars in the 1960s. The screenplay, written by Lauren Wild, was brought to Franco by David Bortolucci of Jane and Sheppard Productions, who will be producing with Julie Yorn of LBI Entertainment. Franco will also produce, along with his RabbitBandini Productions partners Miles Levy and Vince Jolivette.
The film charts the rise of Sebring as a self-created men’s grooming pioneer, as he climbed the social ladder in Hollywood during the 60s. There is also a focus on his romantic relationship with the beautiful young actress Sharon Tate.
Franco hits Park City for Interior. Leather Bar, which he co-directed, the fetish docu Kink he produced, and Lovelace (in which he costars). The actor, who’ll next be seen in Sam Raimi’s Oz: The Great And Powerful and Harmony Korine’s Spring Breakers, continues to be impossible to typecast. But he’s a spitting image of the tress-master Sebring. Franco recently directed film adaptations of William Faulkner’s As I Lay Dying and Cormac McCarthy’s Child Of God. He is repped by CAA, James Levy Management and attorney Warren Dern. Paradigm reps Wild
Posted by ColScott at 5:28 PM 6 comments:

It's been a while since Debra Tate said she was going to get legal on Alisa Statman because of the wonderful tribute book RESTLESS SOULS.

I also offered to pay for a lie detector test if Debra would sit for it.

There seems to be a witch hunt a brewing over at evilliz.  Unknown user Austin Ann has posted a supposed report from Bobby Beausoleil's jail file that implies that Bobby and his now deceased wife were running not only a child pornography ring but were also helping pedophiles connect with one another, almost like online ordering, in the years before the internet.

I am doing some first hand research into this.  My guess is IF this were true everyone would have been crying it from the treetops for decades.  But who knows, I could be wrong.

Sequiera is better than Stephen Kay, he who pronounced Steven Hodel's piece of shit book the final word on the Dahlia.  But he has a job which is to keep these people locked up.  It is a stupid job since they aren't getting out, but he does it well.

The fact that no previous DA brought it up tends to make one think it isn't factual.  Because they couldn't have helped themselves.

Somehow, this assertion by Ann makes St. Circumstance feel vindicated.  Because he needs some validation in his life.

IF this is true then Bobby should be held up as a child perverter and never get out.

But I am not going to weigh in until someone proved something.  Because in America, people are innocent until proven otherwise, no matter what human bags of insecurity striving for Sainthood say!
Posted by ColScott at 10:40 AM 5 comments:

With the advent of Lucky 2013 I hope that all the researchers out there get their heart's desire and have a healthy and happy New Year.

David Ferrie: Oh man, why don't you fuckin' stop it? Shit, this is too fuckin' big for you, you know that? Who did the president, who killed Kennedy, fuck man! It's a mystery! It's a mystery wrapped in a riddle inside an enigma! The fuckin' shooters don't even know! Don't you get it? 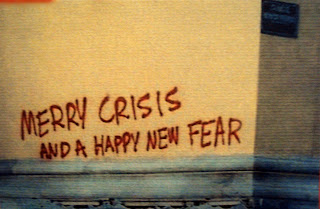