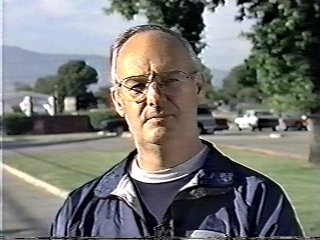 Word has reached the Col that Bill Nelson is dead.

It's a weird feeling, because that means that so much evil is now gone from the world, along with so much potential for good.

A quick summary for newcomers- but this cannot really do justice, you had to have been there.

In the early days of the web, there was only one site for Mansonalia. It was www.mansonmurders.com. Originally set up to promote his first book, Tex Watson- The Man, The Madness, the Manipulation, the site actually became Bill's raison d'etre, going up and down several times over a 6 or so year period.

The Watson book itself was an obsession- Watson had been allowed to marry while in jail for eight murders and had four children who were all living on welfare. The quest to expose this was a good idea, but the book was almost incoherent, and therein lay the tragedy- had Bill bothered to just spell check it before he self-published it, it would have sucked twenty times less. But he didn't. He never knew when to stop. Harassing Watson and his screw-loose wife was a noble thought, but then he started stalking and photographing the kids who did nothing wrong to anyone. This was the Nelson paradigm.

He claimed to be a Christian and a minister, but his morals were flexible and convenient. Supposedly an associate named Lisa Statman stole the death photos along with the final roll of Sharon/Jay at the house photos from a retired cop. He chastised her for it in his second self-published (and non-spell-checked) book Manson: Behind the Scenes. Yet he SOLD these very same photos on his site for years and provided them to Jon Aes-Nihil who sells them at swap meets to this day.

Without Bill we'd never know about Linda Kasabian and her kids' ongoing life of crime. He found Gypsy through her pastor, he found Michael Brunner and so many more. Yet he never understood the context of his accomplishments. To him it was all black and white. He was right and YOU were wrong. He was also obsessed about the Zodiac killings- so obsessed that he came to believe his two obsessions were linked, despite the absurdity of the thought. He would antagonize and rant biblically against anyone who challenged him. Ultimately every person who believed in him turned away, from Doris Tate to Barbara Hoyt.

Hoyt is another good example of his paradigm. For months he had her mouthing off on his site under the pseuodonym DESERT SPEAKS. Never mind the fact that she lied under oath at several of the trials as we explored earlier on the blog. Never mind the KEY fact that she was IN Hawaii in the first place TO AVOID the Bug when she got her special Burger. She never was that important a person in the group. But each of her edicts were taken as gospel. He started to record their interviews in the hope of a big book deal. He staged an illegal tour to Death Valley with Hoyt as the guide (Sandra Good turned him in but he eluded capture). He hosted a dinner for her and I think Snake Lake. Anything to profit and exploit. Later when Hoyt turned on him, the fucker SOLD the cassette tapes that he made of their interview and I PROMISE you she didn't get any of the money.

The most truly evil thing he ever did occurred after Patti Tate died. She hated Bill Nelson and broke him away from her mom. She was in a lesbian relationship at the time with the same woman who supposedly stole the death photos that Nelson so freely sold. His Christianity was appalled. She died, tragically young and Bill Nelson POSTED the death certificate on his site along with her address, the home where her children still lived. Nice.

Nelson never recovered from a fight he picked with Sandra. He published photos of the house where she and St. George lived. He attacked her site, ATWA. He accused her of crime by calling the local police. Like a righteous fool, he kept at her. Then one day she fired a bazooka back.

All of us Manson scholars were blown away the day it was revealed that devout Christian, holier than thou Bill Nelson had pled nolo contendre ten years before to molesting two twelve year old girls. But it was true; Sandy posted the complaint and the court papers and all the disgusting details were revealed.

He tried to claim his pastors and family all knew it was a fraud, but if it were untrue, he never would have copped a plea.

He stumbled around for a year or two after the bazooka and then took the site down.

I understand John Aes Nihil acquired most of his research and is in negotiations to acquire more.

He had lifelong diabetes and died of pancreatic cancer back in October according to my sources.

Bill Nelson reminds me once again of Ken Anger. So much potential, but he was such an asshole he kind of wasted it all.

Hopefully he was right in his beliefs and he is partying with Jesus right now, while asking him what the motives really were.

I heard from a reliable source that Lisa Statman never stole the photos in question. That Mr. Nelson had obtained a press pass and had gotten access to the LAPD evidence room and that he in fact stole them. The alleged cop who gave him a copy of these photos right before he died and Lisa Statman are simply convenient scapegoats. He showed Lisa the photos that he stole and she stole them from him because she wanted the Tate family to have them. Nelson stole and sold these photos according to my source.

I like how the fotos I took off my dvd shows him half in light half in shadow- kinda summarizes the guy.

What show is that from? His interview with Doris?

That is from an interview he did after the Leslie 98 Parole hearing.

I kind of miss the old geezer.

Nellie
Nobody cares if Larry Melton lives or dies.

I RIPPED OFF BILL NELSON WHEN I GOT A FREE TRIP TO BARKER RANCH. I GOT HIM GOOD. HE AND THE INYO PEOPLE WERE SO DUMB