Tookie is Cookie with a T in the Front 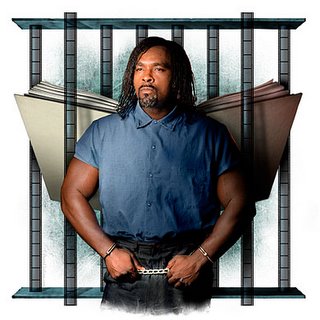 It is starting to look like the State of California is gonna fry Tookie Williams. I don't know that they should be frying anybody since they can't even balance a budget, but it isn't up to me. Maybe Arnie will cut him some slack, who knows, but if he didn't kill four innocent people for $200 bucks, then starting the Crips is kind of a good enough reason to fry someone anyway.

I am starting to hear one refrain though... usually from the vast ignoramous population out there.

"Why is Charles Manson still alive then?"

You can sound intelligent just by replying "He didn't kill anybody."

Of course, you can explain in more detail that his sentence and all of his followers' sentences were overturned as "cruel and unusual" by the Supreme Court of the State of California that refuses to overturn Tookie.

Or you could just say "What the hell has that got to do with anything?"
Posted by ColScott at 6:50 AM

Or, if you are going anyway, why not mess with everybody who is killing you?

I thought the death sentences for the manson gang were overturned because the state outlawed capital punishment like most of the country did at that time. So what's that got to do with Tookie? Capital punishment is legal now, the state doesn't believe it is "crewl and unusual" anymore. Jeez O Peet, if the state doesn't believe it is crewl anymore, why should anyone challenge it?
I think God and a lot of other people know what old stinky tookie did. The only injustice here is that it took 20 years longer than it should have to carry out the sentence.
Why is Manson still alive? I guess cause his ticker hasn't stopped yet.
Quite frankly, there's nothing really worthwhile there anyway. His brain is jello, he serves no useful purpose and will contribute nothing of value to society. I'm all for euthanasia. Put the man out of his misery. Have a heart, will ya?

If Charlie's dead where is he buried? I have to poop really bad and I wanna dump a big one on his grave. I can make it come out a big "C" for Charlie. Yay!

OH WASKILY WABBIT, HOWD YA LIKE TO SET A TWAP FOR MOUSEY? CHARLIE HAS A BIG SURPISE FOR YOU IF YOU DO IT RIGHT. HE HAS BIG PLANS FOR YOU, YOU KNOW...

We don't have the right to fry, or at least in this day and age, inject anyone. We, none of us, not the police, the person who inserts the needle, the judge, prosecutor, or you and I are God.

Yes, I think he is guilty of what he was accused of doing. And just the fact he started the Crips makes him immoral. But he did try and do something positive. And if killing people is so wrong, then why the fuck are we doing it?

NOW IS THE TIME FOR HELTER SKELTER

CHARLIE SAYS white rabbit come to piccadilly square at 5:37 p.m. on January 14. Helter Skelter already started. Charlie is giving instructions from Iraq. He tells Rumsfeld what to do.