I Keep a Close Watch on This Heart of Mine 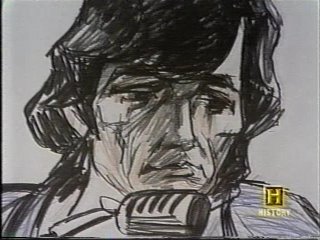 I just watched WALK THE LINE starring Joaquin Phoenix and Reese Witherspoon (what names!) and could not for the life of me get out of my head Charlie being interviewed by Dianne Sawyer ten years ago and out of nowhere saying (not singing) some of the lyrics to the song "I Walk the Line".

Here's a courtroom drawing to end the year on. And a thought. This IS Charlie during his useless and rambling testimony during the trial. But squint a little and maybe like me you'll see Johnny Cash, the man in black, serenading the crowds at Folsom.

If things had gone like Terry and Dennis promised, would we instead be watching a Charlie musical biopic?

Drink responsibly tonight- I don't want to get hit by you!
Posted by ColScott at 12:19 AM