A Variety of Things 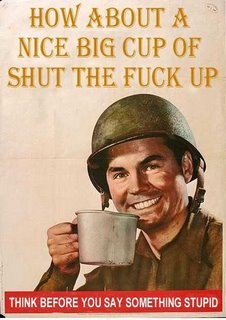 --- We had to go on moderation again because of some toolboxes out there who want to stop the great work of the Col. You can't stop the truth. You just cannot. We'll stay on moderation and then go off, and then on. The children will play and there is nothing we can do about it.

--- Reader Reply- I don't know Savage and I don't care what he/she does. It's their life and their right but don't lump us together, please.

--- Reader Reply- No, I am not associated with Don Murphy either.

--- Reader Reply- No, YepYep, I am not taking Bill Nelson's place. I don't show up at the parole hearings. I don't really have much to do with any of the killers at the moment. Bobby is a friend, that's it. Davis BELONGS in prison because his Christian ministry is horseshit. LVH can come or go, I don't care, but don't claim she is remorseful- she isn't.

--- Reader Reply- No, YepYep I never sent letters to ANYONE in prison.

--- Reader Reply- The Railroading of Charles Manson is not really a book- it was read by 6 people, maybe.

--- Reader Reply- For those of you conversing with James Whitehouse- invite him to do a live interview with us- we'd love to hear why he thinks Sadie should be released. Probably be a funnier film than BEERFEST.

--- There seems to be a semi-active forum here. Seems to be some of the people who cause shit at the only Official Tate-LaBianca Murders Blog. But let's try it.
Posted by ColScott at 2:35 PM

For those of you conversing with James Whitehouse- invite him to do a live interview with us- we'd love to hear why he thinks Sadie should be released. Probably be a funnier film than BEERFEST.

I could care less if Jim is gay or not, but to marry Susan Atkins and Susan with her religion.ummmmmm
sounds fishy to me.
Seems like a farce to me.

Lumps are for Mashed Potates and those usually get Hammered out.

OH
JUST FOR THE RECORD!
I read on some board where they seem to get info from MT's site that blue and red have left CM.
not true.

Red is has NOT denounced CM.

Thanks for clearing that up, Col. I'll sleep better having one thing less to worry about.

The only things I still wonder about: If you don't know LVH, how do you know she isn't remorseful and since when is running a Christian ministry a reason for imprisoning somebody for life?

I'm not attacking you, only trying to understand where you're coming from.

Bruce is imprisoned for life for murdering Gary Hinman and Shorty Shea, as determined by a jury of his peers, not me. While I don't go as far as the BUG and blame him for the Hindenburg etc., it seems likely to me that he is guilty of at least one or two more murders too.
I am not the parole board, I am just one great man. In MY opnion he should be released after he acknowledges what he has done and comes to grips with it. You can ask me how and I'll say I don't know. But blaming Charlie for it is bullshit, you know that I I know that, and that is what he has done. Joining the Christ crusade is hypocritical if one is not going to face the truth. Therefore Davis IMO has not earned a place at the table of the free.

Leslie is similar. According to her own testimony at the trial, SHE asked to go to the LaBianca house. She wanted to come and join in. Little Miss Princess was convicted in TWO trials. She should be released when and if she can prove that she is sorry for what she did, MAYBE. Because what she did was so lame and stupid I'd be afraid to see her on the streest quite frankly. She's nuts. She is not sorry she did it- she is sorry she ever met Charlie who MADE her do it. Uh Huh.

Anyway Yeppers, neither will get out in the next 5-10 years so who cares, right?

Seems to me the most guilty hide behind the cross or BLAME Charlie.
*oh charlie made me do it* NOT!!!!
free will people...FREE WILL.
Bobby at least doesnt say Manson MADE him do it and he isnt running a scam church behind bars.
Not that Charlie doesnt go to the chapel! And he does believe in God.

Bruce Davis wasn't some impressionable young waif-like teenage hippy girl who was led along a path like sheeples to the desert. He was in his mid twenties and definitely knew right from wrong. He had some college under his belt (from what I have read.) He was educated. If all he ever admitted to doing was showing up at Hinman's with CM who proceeded to slash Hinman's ear off, and stabbing Shorty in the shoulder. Why is he remorseful about about all the terrible things he did? He barely did anything. I don't know why, but he makes me shudder like kids over campfires do when you suddenly shudder and they tell you it means that somebody just walked over your future burial plot. Same goes for the rest of the older Charlie groupies. I'm with The Col on this... I believe others were butchered at the hands of Davis. But, can't prove it. Most if not all of the dudes hanging out with CM at Spahn's were (to me anyhow) a lot scarier than Manson himself. :(
cb

I'm with The Col on this... I believe others were butchered at the hands of Davis. But, can't prove it. Most if not all of the dudes hanging out with CM at Spahn's were (to me anyhow) a lot scarier than Manson himself. :(
cb

I am too CB esp Pugh FOR SURE!
Pugh wanted sandy to leave the ranch. then POOF! Pugh and Davis go to sell coins and or scientiology? NO WAY..The murder scene also was errie, dont ya think? then ya have
habe , willets, hughes,and others just too odd ..

who was the female that stayed there in London for a couple of months also with Pugh and Davis?