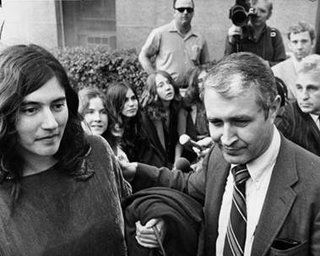 Mark said on his terrific website:
I've been helping the History Channel with an episode for a new show to be called "Our Generation." The tentative broadcast date is October 19. I connected them with Catherine Share who has agreed to do an interview for the show. Others are still under consideration. I have also been told that Vincent Bugliosi will be doing an interview. Each episode of the series will focus on a major event of the 1960s and 1970s.

Except you can go to the History Channel site yourself and see that there is no such show scheduled for that date or mentioned at all on the site.

I was looking forward to people asking Gypsy why she repeatedly fired her guns at policemen, committed major credit fraud, married a felon so she ended up in "witness protection" and yet still prays to Jesus.

Maybe she could have hugged the Bug again too!

Fucking hypocrites- all of them!

ummmm
maybe many things attrubuted to it.

Mark has his fingers in the Tate fourm and then his friend Ergot who has the Squeaky fourm.
kinda like Janus to me.

I can report that someone alleging to be from The History Channel contacted me by email on Oct. 2 after seeing one of my Manson themed videos to inquire about licensing rights to Manson's song "Don't Do Anything Illegal." For those who like all the facts straight, here is the email:

I am an associate
prodcuer at The History Channel, and we're doing a special on the Manson
Murders.

I came across your
site while I was doing research.

Is this a real
recording of Manson singing? If so, do you have the rights to it? We'd
like to use it and are willing to license it, if possible.

Thank you for your
help!!

I sent her to Phil Kaufman. She wrote back thanking me, telling me that was just what she needed.

Funny, if Turner is helping them so much, that they didn't direct this simple inquiry his way. This does however confirm that "Our Generation" is a real program and that a Manson episode is in the works.

Hope you're having a great weekend Col. Readers too! xo

Isn't it amazing how old "JC" gets dragged onto the scene anytime someone runs into trouble?
Tex Watson, Dennis Rice, Bruce Davis, Catherine Share, Susan Bartell all play the I love Jesus card.

Jesus Christ would have made a great relief picther if he played baseball because he always gets called on when some dope gets into trouble.

With the way the Steve Trachsel of the Mets was pitching tonight, if i were Willie Randolph, i probably would have put "JC" on the hill and give him the ball. He couldn't have done any worse.

"ummmm
maybe many things attrubuted to it".

Hon, what does attrubuted mean?"

so you buy the "jesus" crap?

"Susan declared herself reborn in 1974 and has made Jesus Christ an important part of her life so naturally i exclude Susan from the others in that sense".

C'mon hon. Do you buy the jesus plea?

When did you get on the bandwagon?

"Tex Watson and his phoney Abounding Love Ministry along with Dennis Rice and the others only turned to Christ late in the game".

savge says
Tex Watson and his phoney Abounding Love Ministry along with Dennis Rice and the others only turned to Christ late in the game.

All a joke to me.
Tex is the biggest joke! Dennis Rice is just stooopid.
Now Gypsy! LOL

Savage Disciple said...
Tex Watson and his phoney Abounding Love Ministry along with Dennis Rice and the others only turned to Christ late in the game.

It really depends on what you mean by "late in the game"...

I'm not convinced of Watson's sincerity...
But, as far as I'm concerned, that's between him and God...

How've ya been Savage?

"Watson is just using Jesus to cover up his sins and that's the real irony of his whole ALMS thing".

"Susan tried to redeem herself by letting Jesus Christ into her life and she's to be commended for opening herself up and trying to repair herself spiritually".

You can actually deem one to be spiritual and the other phony? You must be in line to be the next saint, right hon?

You can actually "see" right into their heart?

Tex has used his position with the ALMS to gain special privileges at the institution. Susan never played that game and she didn't set up some phoney non-profit organization.
savage says


Yes he sure did. Kristen did smarten up and left the SOB.

I look at it this way. One, I don't use the old "ol JC game" language, as I REVERE JC - that's one, so please remain respectful, whether you believe or not, to us that DO.
Secondly, it is not for us to judge - only JC will judge.
Third, you can "know them by thier fruit" - actions, rather than words.
Last but not least...it is NEVER "late in the game" - never too late.
That is just my take, and my input. No one has to agree. I may be skeptical also, but I leave that to THE ONE, who knows. Who cares. I feel they are where they belong and got off easy, at that.

I am more annoyed at the prison system, for letting them have conjugal visits, bear children, live better than most OUTSIDE prison - that is not consequences, to me. If they are born again, fine, keep it in prison and use it there. But, the prison should not have let them have the life they have, when the victims had no opportunity left.

This isn't the Jesus Christ board so you may as well keep your bible thumping to yourself. I for one don't give a rats ass about the old hippie dude.

No, it's the Allah board dick face.Pull the dick out of your brain.

I too believe in justice but justice was not served in this case. This is probably the first real example of someone being found guilty by the press and then blanket convictions for all regardless of their role in the events that took place.

Savage Disciple said...
If Tex really did take Jesus Christ into his life, then he would have confessed to the murder of Marina Habe. Bill Nelson was convinced that Tex Killed her and I believe that Bill called it right.

Marina Habe was killed in December 1969, Watson was in jail in Texas... Least that's what his arrest documents say...

He was arrested in Texas in November 1969 and was not brought back to California until September 1970...

So, Tex couldn't have killed Marina...

I Think Bruce Davis did ,and always will think so.
among others that were left as a unsolved.

4sharon, HOW ABOUT YOU BE RESPECTFUL TO EVERYONE ELSE!
You trying to force your beleifs down someone eles throat is not respectful. People have the right to beleive or not to beleive, and state as much. I didnt read anything where someone called you a bible thumping idiot or anything, if they dont beleive in your fiction that doesn't make then disrespetful, but if you feel the need to call them out, It means you are not a person of your convictions.