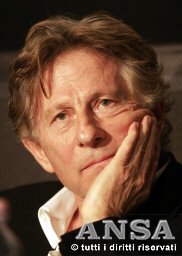 Didn't know about that documentary footage with Sharon... will be on thelook out for that.

The 73-year-old filmmaker, actor and writer will collect the Fellini Foundation Prize - a gold-leaf statue bearing a dream-like drawing by the Italian maestro - in December .

Foundation Chairman and filmmaker Pupi Avati praised Polanski on Tuesday as "a director of remarkable stature and courage whose resourcefulness is unmatched" .

Polanski was particularly pleased by the honour as he is a life-long admirer of Fellini, ranking him alongside Orson Welles and Akira Kurosawa as one of the most inspirational directors ever born .

Fellini, who died in 1993 at the age of 73, is also known to have admired Polanski, rating his 1967 Rosemary's Baby among his 40 favourite films. The pair actually met in 1969, on the set of Fellini's surreal Ancient Rome dreamscape movie Satyricon .

The encounter was filmed by Gideon Bachmann who made a documentary about the making of Satyricon called Ciao Federico .

Polanski, who was born in France but grew up in Poland, will also pick up a lifetime achievement award from the European Film Academy in December .

The director's films include The Tragedy of Macbeth, Chinatown, Tess, Frantic, Bitter Moon and The Pianist, for which he won an Oscar in 2002 along with its star, Adrien Brody .

Polanski escaped from Poland during the Second World War but his parents were sent to a Nazi concentration camp and his mother died in the gas chambers .

The director's experiences were evoked in The Pianist, which recounts the true story of Wladyslaw Szpilman, a Polish virtuoso pianist who miraculously survived the Warsaw Ghetto and the Holocaust but was the only member of his family to escape deportation .

The film also won the coveted Palme d'Or at Cannes and the Donatello David for best foreign film, Italy's equivalent of an Oscar .

Polanski will receive his Fellini award in Rimini, the Italian director's hometown, on December 16 .

The Fellini Foundation, which is based in Rimini, was set up in 1995 at the request of Fellini's sister Maddalena with the aim of conserving and promoting the memory of her brother and his work .

My applause to Roman. I watched "Knife in the Water" the other night...still great.

Roman Polanski's movie The Pianist was amazing. Not only was it heart breaking but it was educational. He would know what it was like because he escaped from Treblinka (I think) at the age of nine. His family perished there. Then years later his very pregnant wife is hacked to death along with his close friends. He's weird, a perv and so on, but I like his movies.

(Larry King had the woman that he molested on his show a few weeks before Polanski won the Oscar, and she even said don't judge the man... judge his work.)
cb

How can somebody that reads comic books appreciate anything that Roman Polanski ever did, though.

Isnt that a big jump from Spider man to Thomas Hardy?

Uh meatwad? Who ya talking to?
just saying...
cb

Roman polanski was and is still brilliant. However being a mother of 3 teenagers i wasnt too impressed with his choice of girls after Sharon.

Polanski is intriguing.
I loved Rosemary's Baby and The Pianist.

Hey Mr.Meatwad-isnt the Eisner award given in the comic industry?
Need to make us a new chee head.

I have a question i was wondering if anyone knew What ever happened to charlies sons well the ones we know about,the one from his marriage to rose and pooh bear?.Also anyone know anything about matthew Matters claims to be charlies son looks like him and is a super nice guy.

Repulsion is among my favorite films. Roman is a fantastic filmmaker. His personal life is his own and I'm glad he is getting the recognition for his hard work and vision. He is a pioneer storyteller.

deadwoodhbo said...
I have a question i was wondering if anyone knew What ever happened to charlies sons well the ones we know about,the one from his marriage to rose and pooh bear?.Also anyone know anything about matthew Matters claims to be charlies son looks like him and is a super nice guy.

Or his adopted sister??? He never speaks about.

Roman is a great film maker and I like him as a person. I don't believe he treated Sharon wonderful AT ALL, but, I do think he loved her. I am sure he was NOT an easy man to live with and was self absorbed/self willed and self centered, while married to Sharon, but has matured after all these years...he deserves this award.

4sharon said:
>Roman is a great film maker and I like him as a person. I don't believe he treated Sharon wonderful AT ALL, but, I do think he loved her.<

I wouldn't go as far as saying that Roman was a "Great" file maker.

Alfred Hitchcock and Cecille B. Demille were "Great" film makers.

Roman was probably what you'd call an "Up and coming" film maker but some of his movies i didn't care for very much. His movie, "Day of the Dolphin" was nothing i'd want to pay to see more than once although i do think his film "Rosemary's Baby" is still a classic even today and is most likely his trademark film.

As for Sharon and Roman, the contrast almost reminds me of beauty and the beast. I don't know how much of Sharon's being with Roman had to do with Roman helping Sharon launch her career. It was said that Sharon onc dated Steve McQueen and Roman is no Steve McQueen.

The Hollywood crowd runs in strange circles but I have a feeling that had Sharon not met her untimely end that she and Roman would have most likely gone their seperate ways.

It makes you wonder if she and Jay Sebring would have gotten back together.

I agree. I do NOT think Sharon and Roman would be together today. I Debra and her board INSIST there was nothing but PARADISE between them, because that is all Debra has to cling to - distorted truths. I think they would be LONG OVER. It would have been only a matter of time before Sharon got smart enough to leave him. She never had a mind of her own - she parroted everything Roman said. OMG, don't let "Paige POO" hear THAT - she'd need to down a bottle of wine FAST.

I agree. I don't think Sharon would be with Roman OR Jay, today.

Nice to meet you Paige. I'm a dead whore myself. One could almost say I was fucked to death!

Were you REALLY, Paige???? Sorry to hear that, but, guess you deserved it!

My name is not Paige you fool, can't you read who posts what or are you too busy jerking off with your left hand while your right hand flips through your bible...

I'm someones dead whore of a mother you lame idiot.Man and I'm starting to smell pretty ripe too, it's not easy being me.

Yes, you ARE a jerk, so keep jerking off - hope you jerk it off and die "3centsErin".

Speaking of fucks...you obviously need a good one. I guess the old hand gets tired after a while.

Take it from a good old dead Southern mother...we all need it now and then. I sure got plenty of it in my lifetime. God it was great to be a gracious Southern whore.