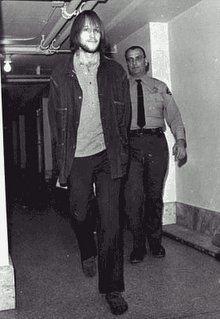 My biggest complaint with Tex isn't that he slaughtered nine complete strangers- it' s that he blames an ex-con loser named Manson for what he did.

My biggest complaint with Sadie isn't that she slaughtered a pregnant lady and danced in her blood- it's that she blames Charlie while thanking Jesus who she once thought were one and the same.

Why I respect Bobby Beausoleil is because he does NOT blame Charlie for Hinman- even though if Charlie had not swung his sword like a freaking retard Gary never would have almost lost an ear and this shit wouldn't have happened.

So I wondered where Clem stood. This excerpt from 1978 Parole Hearing (thanks yet again to "Unstoppable') confirms that Clem pussied out and blamed the short guru.

INMATE GROGAN: First, it was 10 years ago. I’m a completely different person to this point. I was young, 16 years old, you know. I was vulnerable to any hustler that would want to hustle me, really, because of my lack of street experience, my lack of just being out in the world, period. I probably would have gone for anything hook, line, and sinker, any salesman or hustler that wanted to hustle me, because they caught me at that age, that point of vulnerability. I was manipulated very easily. My defenses for what he had for me were, you know, almost nonexistent. It was two years after I was already incarcerated that I realized the games that he had run on me, psychological games. It was over my head, out of my awareness. It was just, you know – and now that I have been around hustlers and all types of people in the criminal line of existence there is no way I could let anybody hustle me into anything, into believing a certain philosophy.

HEARING REPRESENTATIVE VINEYARD: Well, according to the most recent report, staff is still describing you in terms of your passivity and your dependency. Whether or not this is still at that same degree it was 10 years ago can be debated, and probably isn’t, as you say. But whether or not it has reached a place – what could you offer as a demonstration of the fact that you have become your own man in the past 10 years that this kind of influence couldn’t be exerted over you again?

INMATE GROGAN: Well, I think the records state that if I’m so dependent as they suggested, I would most likely be in one of these gangs or cliques and my dependency would be on the group itself. But overt these years I haven’t joined any cliques or have any desire to join any cliques.

MS. SAMUELSON: There is a letter in fact in the file to indicate that there was a reference that he was a member of one of the white groups, and that was corrected to show that there is no such affiliation. That’s also in the file. I’m sorry; I just wanted to bring that up.

INMATE GROGAN: The fact that – I think my record states that I’m more or less a loner. It’s like I don’t hang around with a lot of groups of people. I have managed to complete a trade by myself with no help from nobody. I managed to come to the point from a fair guitar player to take off the state competition in the music field. And that was – nobody helped me do that. That was all my own effort. I managed to put together a nice portfolio of artwork. I managed to become fairly versatile with art at this point.

well clem u were not called scramlebrains for nothing

Hi Col,
I've enjoyed your "mini-series" about Clem and I've learned a lot about him from it. Thanks for posting it.
Since he has not been in any trouble since he was released, I guess the Parole Board did the right thing by releasing him.
What I fail to understand is why Bobby is still behind bars!

Same here... Bobby should have been released by now.
Peace & Love,
SleepyDiane23

What about Davis and Van Houten?

they wont let davis out
scramblebrains is less dangerous then bruce

I think they should keep Tex, Sadie and Pat in prison and let the others go. And as for Charlie, I think he likes it there and after all of this time, he could not function in the free world.

It really disgust me that the blame
Charlie game still works. These people, especially Tex, just sicken everyone by not having the balls to man up to their crimes.