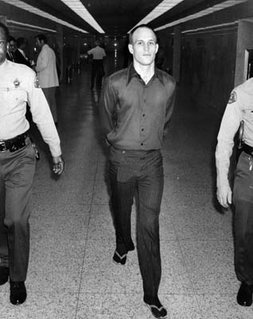 I wondered REALLY why Shorty had to go. Sure, he was cramping Charlie's style and raging on and on to get the Family chucked off by George. But George was tapping the Squeaky vein, he wasn't listening to Shea. So why risk shit by killing Shorty and bringing him to Now? This is Clem's version (thanks Unstoppable) from 1978. Seems to me hitting on the women was a pretty realistice reason...not.

INMATE GROGAN: Well, it was like a growing hostility. They didn’t like him. Charlie didn’t like him because he was – he was always drinking, and he thought he was a slob. He was, you know – was always talking about messing with the girls that were there. And it was like, you know – it was kind of subtle at first, the way, you know, he voiced his dislike and disapproval of the man. Like he would bring it up in conversation at dinner when we all sat around and ate. Over a period it grew worse until – and then we were raided by the police where everything we had was taken, that we had bought legitimately. All our tools and cars and all the possessions that we had accumulated. And plus the children were taken, too. Everybody was arrested on the ranch. In fact the only person left was George Spahn, and he was blind. And they had Carl’s brother come in and watch him so he would have someone to take care of him.

PRESIDING MEMBER BROWN: Why were you arrested?

INMATE GROGAN: I was under the – because Mr. Shea had told the police that we had a stolen car ring. Okay? Well, we spent three days in jail, and we were released. And we didn’t get back none of our property. The pink slips were confiscated – along with our property – to four or five dune buggies that we couldn’t get back from them: the children put into foster homes. And what it really did is made everybody really upset at this guy, because I was led to believe that he was doing it to get us evicted off the ranch, to get us thrown off the ranch. And that was the only place we had to stay at the time. And it was through his actions that he caused us this trouble. I think it’s – you know – excuse me. It goes – you know, it goes – it’s kind of hard for me to talk about this because there are a lot of emotions that I have experienced, guilt and stuff, you know, what I did. But there was, you know, a feeling almost of hatred toward the guy because of what he made us go through, the children and stuff. Like we had held the children in really almost the highest position. They were home delivered and breast fed. It was like – our feeling for the children was really the highest thing we felt. This was mostly the whole reason we was all together, to put the children in a good environment, free from social indoctrinations and stuff, try to raise them as natural as we could. And then to have someone come along and form a false story and have them put in foster homes, it was really a blow to the women and men that were at the place at the time.

Am I drunk or is that a great picture of Clem? He's not the Clem we know and love. He's clean-cut, square-jawed, and the shirt looks like something modern, not out of the early 70's (whereas almost ALL other TLB photos look incredibly dated). And ya gotta love the flip-flops.

I've long found this photo kind of trippy. It's Cleaned Up For Court Bizarro World Clem, but he still has this wiseass look on his face.