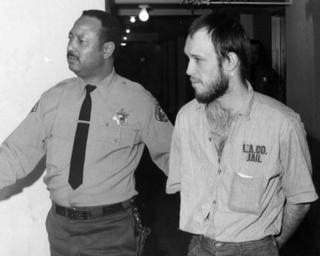 BUG talked about Clem's indecent exposure charge ... whatever. This is Grogan's version- from the 1978 hearing that did not release him. I don't buy it but it is as good a story as any. I've never seen this much info on it before. Enjoy. (transcribed by "Unstoppable')

The incident in concerning the indecent exposure, could you explain that to the Board, what that entailed?

INMATE GROGAN: I was coming back from the Spahn Ranch where I was working before and I was going to my parents’ house. This happened on the same block as my parents’ house. I came back and I wanted to get some money because I had a traffic ticket that I had to pay off. My brother was living there and he offered to pay the traffic ticket. So there was nobody home. As I was leaving there was some neighborhood kids that were on the lawn and I was playing with them and the pants I was wearing had the crotch ripped out of them from riding on the horses and things at the ranch. So when I was playing with the kids on the lawn I guess one of the mothers had viewed it from one of the windows and had called the police thinking that I was exposing myself to their children. As a result of that, I was arrested.

MR. FOLEY: In fact, you were referred to a hospital for a period of time?

INMATE GROGAN: Yes. They referred it to, I think, it was for 90-day observation.

MR. FOLEY: Also, one other thing crossed my mind. This ranch that you were living on, the Spahn Ranch, were you residing there prior to Charles Manson’s arrival on the ranch?

INMATE GROGAN: I was there when I was about 15 years old and lived in the back. They had a back ranch-house that I lived in and I worked odd jobs, guiding tours for writers and cleaning up the ranch and stuff. They’d give me food and clothing. The rent was free. It wasn’t really nothing to pay for rent. It was just an old shack. It had no electricity or hot water or anything. Just a place to rest.

MR. FOLEY: The next entry on your record is the auto theft, grand theft auto. Could you explain that? That’s in December of 1969.

INMATE GROGAN: I recall being arrested for grand theft auto because I had rented a truck. It was a half-ton truck, I think. I took it to the desert and it got stuck in the desert. At that time I was arrested by . I had rented it for one day. So the company called up and thought I had stolen the truck. I went to court and I paid restitution for it, all the damages and the time overdue. I pleaded guilty, I think, to a breach of promise, a misdemeanor. Is that the same one?

col u dont beleive that scramblebrains told the truth

It isn't 'insane shit!" Jesus Christ. the poor guy. He is seen gently holding the little girl and rocking her to sleep. he gives her a gentle kiss on her hair. You'd have to be sick in the head, or come from a culture that basically hates children and keeps them away from adults, to find that wrong. In Asia, children are doted on and hugged and kissed and rocked and petted all the time. Children will climb trustingly onto your lap. the security guards, the baker, everyone will pick up kids and hug them and give them a swing or whatever. My friend in Thailand took his 2 year old girl out, went into the butcher's, who he vaguely knew, the butcher instantly held out his arms for the child and took her up, rocking and singing to her and my friend said, in Uk or USA, guy would probably be called a paedophile. Just like poor old Clem. Clem, who was renowned for his sexual prowess among ADULT women.

Lost Sailor, I agree, he's got pedo tendencies. We can say that based SOLELY on the statements from the MANSON '73 movie.