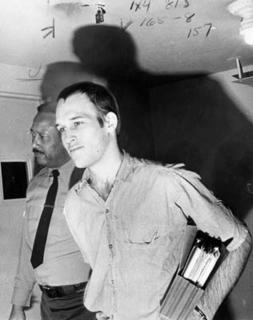 Did you know that Clem was married? And had a son? The son would be 27 today. Son of Scramblehead? Jesus sounds like an AIP exploitation film. Anyway, this is from 1981 and Clem is asked whether he still accepts Charlie as his personal savior. This is his final answer. Thanks again to "Unstoppable"- now get reading and learning.

BOARD MEMBER TONG: At a certain point after you’ve gotten married, your wife needed to change her unlisted phone number and indication because of threats from Manson family. Would you elaborate upon that, because this was sometime after you were incarcerated? Charlie Manson was incarcerated. Who was the threat coming from? What was it all about?

INMATE GROGAN: Well, after couple years being in prison, after reflecting clear in my head, all the cobwebs, what I call the drug residue, I just started thinking. I came to myself. Man, I started thinking, well, what am I doing with these people? Man, why am I still even letting them write to me?

So cut them loose. In the meantime, I had met, you know, met my wife and we visited over a year. I visited with her for a year because I wanted to see where she was at in her head, as far as for a wife, good wife, my children. It was more like a testing period. I let her go through to see if she would stick by me. Of course, there was no guarantee of that. It seemed that after a year of going through these hardships of prison life, visiting, coming back and seeing you, on the basis that she had left, you know, call it quits or she would stick by me.

So consequently after a year and a half, I decided we should get married. And some of the girls that were involved in Charlie’s in got wind of the marriage and they threatened her with telephone calls. Telling her that she wasn’t good enough for me. They were going to kill her; send somebody over to get her, that she should leave me alone; get the hell out of there.

These are not quotes, just summations of the feelings. So I told her to change her address, move out of there. I wondered how they know where she lived.

INMATE GROGAN: I was wondering how they know where she lived.

BOARD MEMBER TONG: At the time you got married, were you prepared as far as the consequences that that might be the reaction from the people that were still out?

INMATE GROGAN: Yeah. It was – I had those reactions to them during that relationship. We had told her, you know, relatively the same thing, leave me alone. You have no business with me, and I kind of half ass respected that from those people. Because in their eyes, here I am in the past involved. I am in effect getting out of the group. To them there’s no getting out. Because it’s – it’s kind of difficult to explain, I guess, the attachment they had to each person that was involved with them over the years and they didn’t want to let go of it.

INMATE GROGAN: It’s like we’re supposed to be bonded together for life, you know, for eternity. Almost to a, like a vow, you know, to that. That was their viewpoint of my involvement with them and I didn’t see it that way. And they was highly upset that I would leave them and just told them to get the heck away.

BOARD MEMBER TONG: I think you indicated that at the time of the killing, correct me if I’m incorrect, that Manson said to mutilate the body and that you surmised that it was a means of bringing the group more under his control, because the group was beginning to shift away from him; is that correct?

INMATE GROGAN: Yeah. At the time – it wasn’t really at the time of the murders. It was after the murder, sometime after. The murder that he told me that, you know, circulate that story if anybody asks.

MR. ROBINSON: Just for clarification, he didn’t tell you to mutilate the body?

INMATE GORGAN: He told me to say that we had mutilated the body.

BOARD MEMBER TONG: Okay. Of the people that were involved in the Manson family, do other people have – at the time that the incident took place, people were very close to one another in terms of the psychodrawn path? At this point is there a spread in terms of individuals?

BOARD MEMBER TONG: Where people are at in terms of their relationship with Manson or –

INMATE GROGAN: I was the only one that was, you know, saying – taking a good look at where they’re at. It took me a couple years because oriented myself in prison and then still work sifting though the distortion of the thinking I had. But, yeah, I think they were desperate to hold what they had, what little clique of a group they had left.

BOARD MEMBER TONG: Are some of them still pretty close to him in terms to the extent that you can be?

INMATE GROGAN: My contact with them over the years has been nill. I imagine probably couple of the girls are still with them, but that’s about it as far as I’m concerned.

BOARD MEMBER TONG: Okay. I don’t have any other questions.

Where is Steve living now?