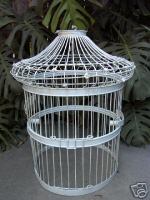 Somebody with a PERFECT ebay score is selling birdcage from Cielo Drive. It looks like nice cage if you want to cage a free flying winged creature. He's not asking a premium for it. In fact, according to his story it was actually garbage thirty five years ago. He's even offering no postage if you buy it in LA and come and get it. In all likelihood, his story is true.

Why the hell you'd want it except as a birdcage is beyond me.

That said, one of the Tate Candid Biddies, probably Paige (lol) emailed the poor seller and this exchange took place.

Q: If you're going to peddle a fake item with Sharon Tate's name attached to it, maybe you should get your facts straight. This auction will be reported to Debra Tate, Sharon's sister. She has VETO rights over any auction involving her dead sisters name.

A: I appreciate your comments and fear of offending anyone was a definite concern of mine. That's why I did not use Sharon Tate or any other victim's name in the title of the auction. I certainly believe this item to be from the Cielo Dr. house or I would not be listing it. From my feedback you can tell that I am very legitimate with my eBay transactions. If there are errors in the facts I'd appreciate you pointing them out (I know I had the guest house occupant wrong and have deleted that). I know very little about the murders personally. I am selling this for my elderly friend who told me the story at a million miles an hour and I could very well have made a mistake. Objects have history and my goal was to honestly tell the very sensitive history of this piece in a factual way that would not upset anyone, especially people like the families of victims. Again, thank you for writing. I'm going to post your comments and this response on the listing to unscore the sensitivity of this subject matter. 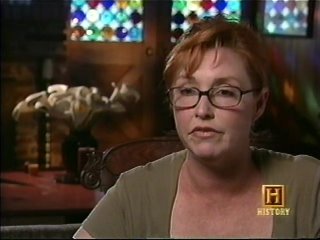 The response was more intelligent that the question. Anyway, Terray906, don't listen to this stupid biddy. DEBRA TATE WAS DISINHERITED by her father. Any right of publicity (which would have to do with Sharon's image and likeness anyway) would belong with Patti Tate's children NOT with the lying, vengeful, father stealing Debra. DEBRA TATE HAS NO RIGHTS TO SHARON TATE. At all. If she contacts you or ebay claiming that she does, please let us know so we can contact the proper authorities.

There is ZERO violation being done here by you.
Posted by ColScott at 6:15 PM

First it's not VETO rights, it's VERO rights lol Just a typo probably..

Second, Debra doesn't have the VERO rights to Sharon's name and likeness on Ebay.. Nobody does...

Third, why risk a perfect feedback score on an item where you cannot guarantee it's authenticity?

It doesn't even look like a birdcage from that era. It's not Avocado Green or Turquoise lol

Heaven- did you send that question, girlfriend?

I have a 3ft tall Victorian Birdcage, alot prettier that the one shown here, I also put flowers in mine.
I think birds should be free to fly.
Love the movie *12 Monkeys* the plot to free all the animals in the ZOO. Brad Pitt is easy on the eyes too so...double your pleasure.
Peace

I just told him that Rudi's last name was spelled Altobelli.. I can't remember how he was spelling it before.. And that there were no victims named Robert. He, at first, was saying that the person in the guesthouse was named Robert and they he was killed too. His story was all screwed up.. He's changed it a few times now..

spookycatz said...
Why a nutjob?

i reckon* I got one of those too:)
Ya cant beat the South!

Colonel, can you post the history channel show with Debra being interviewed in it or is it too fresh?

Thanks and thanks for all the other clips as well.

Having a pic of the bird cage at Cielo Drive would put the kibosh on accusations that it's not authentic. Does he have that?

I don't think he does cause his auction says he has no way of proving it was ever at Cielo. He's just going on the story of an 80+ year old woman who claims it was there...

thank you for all of the lovely video clips colonel.

Who the hell cares? What's the big deal? If the woman in the picture gave it to him, and she says it came from there, let it be. Neither of them are saying that it belonged to Sharon. He's done nothing wrong. All of the books, videos, pictures, rocks from the fireplace, and any other momentos that have been sold were offered due to the connection to the crime. What's the difference? I'm tired of the Debra Tate threat of stopping an auction. She has no reason to do so, and I seriously doubt she'd bother with this. Let the guy sell the cage.

Thank You Col for all the videos.

Thank You Salem for all your wonderful Posts!!!

I WANT THE BIRDCAGE TAKEN OFF EBAY

Nobody will profit from Cielo Drive because I SAID SO

yes Take the birdcage down Now

You guys/gals are funny!

Don't you just want to stuff that damn birdcage in Paige's mouth! That stupid chick thinks she is a MEMBER of that Tate family. She screams LOUDER THAN DEBORAH about issues. WHO does she think she is? She needs to keep her mind on her Guido husband, and family and make THEM a priority for once, instead of OBSESSING on the Tate family. WITCH.

Does anyone have any "shut your trap" tape to SUPER GLUE over Paige's LOUD TRAP? She's been hitting the wine, I see!

Did the birdcage sell?

I hope it did. I hope no one was intimidated by the NASTY OB board HOG, who has NO right to scare anyone from buying it. Hag that she is.

I hope that freakin birdcage sells, just to piss off that sleeze board mod of OB - the little dictator that she is!

You actually make it seem so easy with your presentation but I find this topic to be really something which I think I would never understand. It seems too complicated and extremely broad for me. I’m looking forward to your next post, I will try to get the hang of it!
skip bins brisbane prices
skip bin hire online