To Repeat Something From Above

WHAT THE HELL IS THIS SHIT? 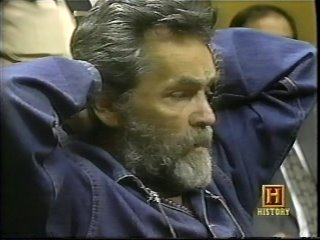 Charlie seems to be holding his head over this development. I am too.

Well.
Charlie would be happy if Bruce got out. He has no hatered towards him, even tho Bruce did sell out and go the Helter Skelter
route.

Yeah well BRUCE belongs where he is, the lying phony

ColScott said...
Yeah well BRUCE belongs where he is, the lying phony

well
I agree with you, but CM has no hard feelings for BD even tho he lied on him. He was Charlie's best friend and 2 nd in command.

yanno Col.
this is not on record, but your thoughts on the deaths of M. Habe, J.Pugh, the Willets and Ron Hughes?
Peace

On December 1, 1969, Joel Dean Pugh, husband of Family member Sandy Good, was found with his throat slit in a London hotel room. As noted, local police ruled the death a suicide. On learning of Pugh's demise, Inyo County DA Frank Fowles made official inquiries, specifically asking Interpol to check visas to detrmine if one Bruce Davis was in England at the time.

Scotland Yard replied as follows: "It has been established that Davis is recorded as embarking at London airport for the United States of America on 25th April 1969 while holding United States passport 612 2568. At this time he gave his address as Dormer Cottage, Felbridge, Surrey. This address is owned by the Scientology Movement and houses followers of this organization."

always struck me as a HEADS UP*

just a site of intrest.