You Won't Outlive This Old Man, I Have A System of My Own 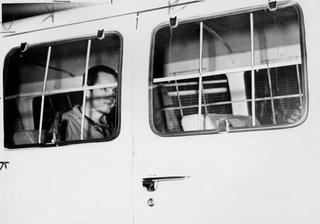 Los Angeles Superior Court Judge Charles Herman Older had been on the bench only a few years when the trial of accused mass murderer Charles Manson landed in his courtroom. By the time the 10-month, highly publicized trial ended, he was a veteran.

In the early 1970s the case was as bizarre as anything the city had seen until then: Manson and his LSD-dropping followers — mostly young women — told of committing gruesome murders in the name of starting a race war, showed up in court with shaved heads and Xs on their foreheads, and sometimes chanted nonsensically, in keeping with what Older would call Manson's "twisted philosophy."

"That's what made the murders possible: 'There is no wrong, and whatever we do is right,' " Older later told The Times.

Older, whom Manson once tried to attack with a pencil, and who sent a Times reporter to jail for contempt after the trial for failing to reveal a source, resulting in a change in the state Constitution, died Saturday. He was 88.

Older died of complications from a fall at his home in West Los Angeles, said longtime friend and former law partner Edward Cazier.

"He presided over the trial in a very firm, dignified way, and he tried to be fair to both sides, with no preexisting bias," said Vincent Bugliosi, the prosecutor in the Manson trial.

Older was born in Hanford, Calif., on Sept. 29, 1917. He later moved to Los Angeles with his family and graduated from Beverly Hills High School.

"He was a Renaissance man," Cazier said. "He was, in addition to his wartime and judicial exploits, an accomplished watercolorist and a very good golfer."

After graduating from UCLA in 1939, he joined the Marine Corps Reserve but later resigned his commission and joined the Flying Tigers, a covert group of American pilots recruited by Claire Lee Chennault to fly for the Chinese government in its war with Japan.

Chennault "was a hard-bitten character who knew what he was there for and how to beat the Japanese," Older recalled in a 1991 Times article. "I can't recall anybody who I would rather have as our group leader than Chennault."

According to his family, Older had more than 18 enemy kills, and was the third highest-scoring Flying Tiger ace. Later, Older served as a major in the Army Air Forces, fighting in the China-Burma Theater.

In 1952, after serving in the Korean War, he received his law degree from USC and, in 1967, Gov. Ronald Reagan appointed Older to the bench.

Manson and three of his followers — Susan Atkins, Patricia Krenwinkel and Leslie Van Houten — were tried for the gory cult killings of actress Sharon Tate, Leno and Rosemary La Bianca and four others in 1969.

The trial was a daily parade of the bizarre, with Manson's followers maintaining their reverence for him and his so-called teachings and Manson continuing with his behavior.

One day during the trial, Manson asked Older for permission to examine a witness after his attorneys had declined to do so. When Older denied the request, Manson launched into a tirade. The judge warned Manson that he would have Manson removed if the outburst continued.

"I will have to have you removed if you don't stop. I have a little system of my own," Mansion replied, according to a 1970 Times article.

Then Manson leaped across the table, placing his foot on the table in an apparent effort to propel himself toward the bench. As deputies restrained him he shouted "someone should cut your head off."

Older was not harmed.

"It was an important case on a number of grounds, in that it involved a number of defendants with extremely aggressive defense council and, of course, a horrendous crime," said Cazier, "and there was the contest with the press over whether a reporter should be required to divulge his source for a news story."

That debate came to a head after the trial, when Older ordered Times reporter Bill Farr jailed for contempt. Farr had initially covered the trial for the Herald Examiner when he obtained and published an account of a witness who said the Manson family had planned to kill such entertainers as Frank Sinatra and Elizabeth Taylor.

Older had imposed a gag order on the case and sought the source of the leak. Farr cited the California "shield law," which he believed protected reporters from naming sources. When Farr later left journalism for a brief time to work as a spokesman for the district attorney's office, Older ordered him to reveal the source. Farr refused and served 46 days in jail. U.S. Supreme Court Justice William O. Douglas ordered Farr released while the U.S. 9th Circuit Court of Appeals considered the case.

"There is no need to attach any nobility to what I did," Farr told The Times. "All good reporters feel the same way about protecting news sources."

After his release Farr worked to establish the principle that a reporter had a right to protect sources. That battle led to the strengthening of the shield law. In 1980, a ballot measure was passed that made the shield law part of the state Constitution.

Years after the trial, Theo Wilson, a celebrated national trials reporter for the New York Daily News, wrote about the Manson trial, a trial "where everybody went a little bonkers — judge, jury, reporters, lawyers, deputies and spectators."

One daily spectator, Julie Shapiro, had attracted attention for coming to the courtroom in a see-through blouse without a bra. Older ordered a deputy to tell the woman not to come to court without a bra, and she obeyed. But later she angrily called the prosecutor a liar and deputies arrested her on Older's order, Wilson recalled.

"As Julie was being hustled out, obviously startled that she had created such an uproar, she plaintively asked reporters: 'What's the matter? Why can't I stay here? I'm wearing a brassiere,' " Wilson wrote in a 1994 Times article.

Throughout the trial, Older remained "very meticulous in his demeanor," Bugliosi said. "He was very formal and he measured his words very carefully."
Posted by ColScott at 8:56 AM