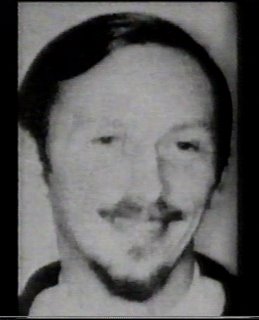 We're at the end. We are unlikely to make strong sense out of all of this but hell we can try, no?


9- Charlie leaves- Bobby/Sadie/Mary continue to threaten and abuse to get the money. Gary promised to go to the police.
10 - Gary mounts a last ditch effort for freedom. Bobby stabs. Girls clean up. Writing on walls.

Here's where all the official stories officially do NOT make sense to me.

You've got your ear slashed. You're having a hell of a day. You basically are fucked. And then you sit there, in more trouble than you have ever seen and you TELL THE PEOPLE YOU ARE WITH THAT YOU ARE FOR SURE GOING TO REPORT THEM TO THE COPS? I mean I don't think so. Even if they didn't have LAW AND ORDER back in 1969 they had plenty of cop shows. You tell everyone "look, this has been a bad day all around, let's just get me some medical attention and I'll forget everything." THEN you call the coppers. But according to EVERY single report I have read Gary assures Bobby, Sadie and Mary that they are going to be reported to the police no matter what they do.

I don't get it. You could argue like some that he really thought that they were his friends and they were closer than we could understand and he was trying to scare them. But you have a GASH in your face that needs stitches. No, it doesn't compute for me at all.

I do understand the final ditch effort for freedom. Very filmic. I do understand Bobby killing him. Oddly, in the two conversations I had with Bobby, I TRIED to spin the murder as almost an accident, that he did it in the heat of the moment, but he assured me that no, he thought about it and decided to kill Gary rather than face the music. I do admire his forthrightness if not his actions.

But what he doesn't answer clearly, nor does the casework, is where the Christ the idea to paint on the walls and blame the Panthers comes from. Because this was not an everyday occurrence in 1969 Topanga Canyon. No one has been able to show me where the idea came from. It was lame ( the police did NOT blame the Panthers or even blacks) and macabre (does not sound like it came from Charlie either).

So we have two more things we need the answers to

1- Why would Gary assure his killers he would go to the police?
2- Why did Bobby and Sadie and Mary write in blood on the walls?

Remember- the killers were NOT scared of being caught. They stole Gary's cars and drove them back to the Ranch. Bobby is captured in the Fiat. Gary is not found for days.

The Col has enjoyed this particular dissection with you. He doesn't have all the answers. But he does believe that the ultimate solution to TLB has its roots in Hinman. No Hinman killing does yield no TLB killings by any equation.

The Col prays for an answer in his lifetime.
Posted by ColScott at 8:28 AM

My pc is lagging.so I sent ya a email Col.

hey Cat
ya I posted that website also.pretty neat info...

catscradle77 said...
A website I came across in my travels...has many chapters...

I think the idea of writing on walls were when some members lived up in Mendieno? ( sp error)before the killings.
People were scared of them, and some of the girls were caught giving drugs out.
Some locals broke in the house and
wrote in Orange spray paint on walls.
Witches* Get out* etc.

Guess they( so called family members) went from there and left BLOOD messages.:(

also
at a parole hearing for susan, Debra made mention that Gary was a friend of her family , even tho he didnt live there.
So .Didnt Debra know Bobby? Bobby had been living there with Gary in the basement for a year or so, and family members were freinds with Gary also.

Harold True testified that he lived at 3267 Waverly Drive in Los Angeles, from the early part of'67 until September of'68, the next door to where True lived was the LaBianca residence.

True testified that in March of '68, Manson, Krenwinkel, Susan Atkins, and several other people who were with Manson, mostly girls, stayed overnight at the True residence. True also testified that in the summer of 1968, Linda Kasabian and her husband visited him at his home once. Linda and her husband were not with Mr. Manson and his group. True testified that on four or five other occasions after the March '68 incident, Manson visited him at his residence. On one of those occasions Manson again stayed overnight. Now, note the tremendous significance, ladies and gentlemen, of this testimony. This testimony by Harold True places Charles Manson, Patricia Krenwinkel, and Susan Atkins right next door to the LaBianca residence, right next door, on occasions prior to the LaBianca murders.

was true into dealing of drugs also?

Salem said...
also
at a parole hearing for susan, Debra made mention that Gary was a friend of her family , even tho he didnt live there.
So .Didnt Debra know Bobby? Bobby had been living there with Gary in the basement for a year or so, and family members were freinds with Gary also.

Where did you hear this and which parole hearing was it. I would like to read this for myself because Debra being friends with Bobby sounds far fetched. It just seems like a huge reach for a conspiracy. JMO

And here's one of my favorite links:

ummm that last link is lame

thats where I read it~

Re: Hinman's cars at Spahn.

When the sheriffs conducted their "mini" raid of the ranch on July 28, 1969, they recorded that Hinman's cars were there. Of course, he was rotting in his house at that moment. So why the hell didn't Manson immediately panic and assume that the sheriffs would make the connection after discovering the body and come back to the ranch to arrest everybody? Not only didn't the cops -- Grap, etc. --make the connection but Manson proved prescient in his assumption (apparently) that they wouldn't make the connection. BB didn't leave in the Fiat until August 3 or 4th, and the VW bus was sold on the 1st of August. So he took precautions, a little late, to get rid of cars, but still didn't seem too worried about the cops linking him/them to the Hinman murder. Why?

What did Manson know that made him so (correctly) fearless?

Col. Scott: What happened to that post that appearred after mine saying that maybe the sheriffs were just waiting for the Family to attack the Panthers? It was there last night as comment #17, then disappearred today. What gives?

Col: What you've got to finally accept is that BB is lying when he says Hinman said he was going to the cops. BB is the only one who says this. The girls haven't said it. Davis hasn't said it. They said they were scared Hinman would go to the cops, but they've not said he threatened to.

BB concocted the drug deal story in the mid-eighties when he realized that as long as the parole board believed he killed Hinman under Manson's orders he would NEVER get released. His drug burn story was invented solely to separate him from the Manson Family stigma that has prevented him from being released for so long. Just like Davis, Atkins, Leslie, etc., as long as he is linked to Manson he will never get out -- or at least not for a helluva lot more years. And he's smart enough to know that.

Both Davis and Atkins have told the board they knew nothing of BB's alleged drug deal. Under specific questioning, Atkins said BB never said anything to Hinman about money owed for bad drugs. We know Atkins has lied in the past, but why would she lie about this? Wouldn't suit any purpose. And BB's version of the Hinman murder has changed how many times now? Three by my count.
1. To the police: Hinman was killed by the Panthers.
2. To the court: Hinman was killed by Manson.
3. To the board: Hinman was killed by him.

Of course Hinman would not tell them he was going to the police, and of course if he was a major drug dealer he'd never go to the police. Truth is, he didn't tell them that and he didn't sell drugs. He was killed on Manson's orders because the $20,000 wasn't turned over.

Joe said...
Col. Scott: What happened to that post that appearred after mine saying that maybe the sheriffs were just waiting for the Family to attack the Panthers? It was there last night as comment #17, then disappearred today. What gives?

He was killed on Manson's orders because the $20,000 wasn't turned over.

Yep: "That leads me to the conclusion that BB killed Hinman, thus he's telling the truth to the parole board."

Nope, he's lying to the parole board to obfuscate his involvement with Manson. Clear evidence that he is NOT rehabilitated.

Yep: "Why is it that people who take responsibility for their crimes still get bitched at for not having rehabilitated? Isn't that what rehabilitation is all about? Not blaming what you did on anyone but yourself?

Because he is mitigating his responsibility. He's changing the story to serve his own purposes -- and in the course, painting a false picture of a dead man who can't defend himself as a drug dealer. BB is still selfish, controlling, manipulative and capable of committing vile acts to advance his cause. The evidence is in the lies.

I wonder if Gary knew about the shooting of Bernard Crowe?

If he did then maybe he just knew that they were going to kill him and nothing would stop them. Of course this doesn't explain why he gave the gun back to Bobby. If he just accepted that they were going to kill him then maybe he was so angry he made sure they knew that he would go to the police, because drug dealer or not, the police still don't like people stabbing and suffocating people until they die.