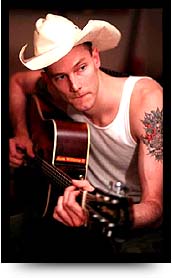 By the end of his three-hour set, Hank Williams III looks like he’s been to hell and back. He dons a ripped up black shirt that reveals his numerous tattoos and protruding veins. His eyes glare demonically into the crowd as he belts out a dark and chilling growl. His hair swings freely as he head-bangs violently.

Beside him, band background screamer Gary Lindsey punches himself in the face with the microphone, causing blood to spurt uncontrollably onto the crowd.

The audience, what’s left of it at least, appears as though they made the hellacious journey as well. The mosh pit is crawling with broken and bruised bodies—for a moment they pause to raise fists triumphantly into the air.

This isn’t Nashville. Hell, this isn’t even country music. This is turned-on, tuned-down and droned-out Dead Kennedys-style punk rock that bleeds sludge metal, exactly the way Hank III wants it to be played.

Of course, the night never begins this way. This is merely one-third of the unholy trinity that is a Hank III show—the part that’s only allowed out after midnight.

Hank III actually begins each night with an old-timey country & western set backed by his Damn Band. His cowboy hat, smashed in and fraying at the edges, hides his long hair and reveals his chiseled facial structure. He plucks his acoustic guitar and delivers a high-pitched yodel.

The grandson of the godfather of country, Hank Williams, Hank III may have completely ignored his legacy if it had not been for a judge’s decree that playing punk rock wasn’t a real job.

“It was a one-night stand where the girl waited three years to tell me I had a kid,” Hank III says as he puts out another cigarette butt. “They dragged it out as long as possible and served me the court papers onstage saying I owed $52,000 in back pay. Country music was something I thought I would just grow old with before then.”

Instead, Hank III sold his soul to devil, Curb Records, who then attempted to censor his lyrics, music and style. “They [Curb] were trying to push me out the gates like, here’s Hank Jr.’s son. I hated it,” he says. After years of launching a vicious “Fuck Curb Records” campaign, Hank III finally won some creative control.

The result was Straight to Hell, a two-disc, self-produced collection of raw cow-punk about whiskey, weed and women, released earlier this year. On the album, his third for the label, he tips his glass to his country heroes, from David Allen Coe to George Jones and Waylon Jennings, while spitting boldly in the face of Trashville’s corporate conglomerates, claiming to “Put the dick in Dixie and the cunt back in Country.”

No matter what style of music he’s playing, Hank III never bites his tongue or backs down from a bar fight. He has no problem calling Kid Rock “a cocky, arrogant motherfucker” and proudly proclaims that Hell is “the first record to have a Parental Advisory control sticker on it for [Curb] in 25 years.” He adds later, “I was born and raised in the Bible Belt; they take everything a little bit too serious.”

Hank III’s transformation from crazed country rebel to hellbilly deluxe onstage only involves a beat-up trucker hat and an electric guitar, but the result is ear shattering. The Damn Band busts straight out of purgatory with a surge of power-chord riffs that would make the Reverend Horton Heat testify.

While his nightly changes in style—from country to hard rockabilly to metal—may seem drastic, the flow is almost lucid. With the current staleness surrounding pop-country music, extremes have become necessary to reclaim the credibility of the genre Hank Williams helped create.

But Hank III seems up to the challenge. He recently recorded an unreleased Charles Manson song with Stanton LaVey, the grandson of Anton LaVey, author of The Satanic Bible. Moreover, he’s started an Eyehategod tribute band called Attention Deficit Domination, in which he plays every instrument.

He’s also getting ready to set the world ablaze with a new side-project called Arson Anthem which features former Pantera and Superjoint Ritual vocalist Phillip Anselmo, whom he states is “stronger and more pissed off than ever,” and Eyehategod henchman Mike Williams. The group recently recorded eight tracks that total a mere 11 minutes. Like taking an electric screwdriver to the head, the songs are spurts of grindcore intermixed with sludged-out breakdowns atop grunted vocals.

At the end of the night though, when the bar finally closes, it all comes down to survival.

“The fact is I work this road and break even to be able to live for about a month and a half and then have to do it all over again,” Hank III laments with another drag of his cigarette. “Twelve years worth of touring in these boots, the duct tape and the holes, like a fucking rat, being the dancing outlaw … they know I’m still there stickin’ it to ’em.”

very interesting.
seems I heard years ago that Steve Grogan was a part of the HW jr or possably this band .
Steve is living the good life, nice home, nice boat.
he made it big.

Is this Curb Records company the same one Mike Curb of the Mike Curb Congregation started way back when? If it is he used to be just about as bland as white bread could be...wonder if he is still alive?

I read somewhere Steve Grogan was a house painter in the valley.

But I'm a compulsive reader. I read just about everything....

the grogan story was BUG bs

i heard from a VERY reliable source in 2002(not the bug) clem was playing guitar for Hank Willams Jr dk if it was the III or not since i dk how many damned Hanks there are.

Sandy Bad said...
i heard from a VERY reliable source in 2002(not the bug) clem was playing guitar for Hank Willams Jr dk if it was the III or not since i dk how many damned Hanks there are...