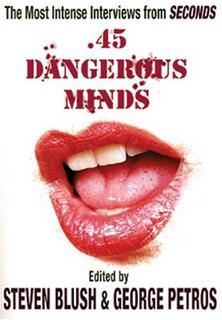 I just spent twenty minutes plowing through KTS just now and learned nothing new except that Denise is having breakfast at El Coyote on the 20th. I wonder if I am invited- she said KTS members so I would qualify!!! The Posts were especially lame today- INANITY thy name is Jimmy Nelson. After Scott Nelson and Bill Nelson why is anyone named Nelson allowed to be a member while your poor Col suffers with superior knowledge suffers in silence anyway? Sad and a shame.

So this weekend I wasn't blogging I was enjoying my money and my supermodel wife and I noticed a display in the window of Book Soup of a book I was NOT aware of. The book is called .45 Dangerous Minds : The Most Intense Interviews From Seconds Magazine .


This is a book I did not know was coming out. I used to get Seconds Magazine whenever I could but it was never easy because it was poorly distributed. For twenty bucks you get a shit load of interviews. What is nice about the interviews is that they are by intelligent people who ask intelligent questions.

Michael Moynihan interviews Bobby Beausoleil. It's an interesting interview insofar as Bobby basically admits to being guilty, but then seems justifiably pissed off at the lengths the DA went to find him guilty in his second trial. The DA was even threatening Brunner with the loss of her child if she didn't say what they wanted. Nice people.

Michael also interviews Charlie in possibly his most coherent interview ever. He talks about a lot of things and it was a very good read.

Arthur Deco interviews the Bug (No show without Punch!) and I have to tell you, I wish I could read the outtakes. He lets the Bug's ego ramble on about his "expertise" with cults and Manson being pure evil, before asking him the million dollar question- if Charlie was really leading Tex and Sadie and everyone, then is it okay to have sought the death penalty against them? Otherwise known as the "how can you have your cake and eat it too, stupid Bug?" question. Vinnie thinks for a minute and calls it a very smart question, then stutters and changes the subject.

Go ahead love- treat yourself!
Posted by ColScott at 10:54 AM

Everyone is invited. There will be a couple of surprises too. Should be interesting.