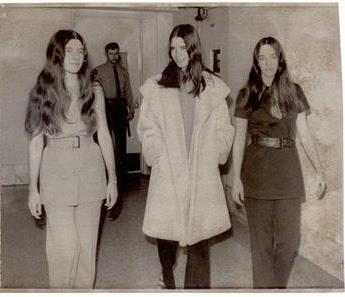 I mean if we didn't have morons who would we have to make fun of and take out the garbage?

Over on KTS Yahoo, the site that banned my superior knowledge and thus inspired this blog I see that they have allowed a monkey in there under multiple names, but mostly Bryan. He is babbling this Ultimate Evil position of Charlie being a CIA operative and shit. Which is all very cool, except he wasn't. He was a two bit con man.

The killings were done by spooks all right- these three bitches who did it and enjoyed it and boasted about it. Pretty spooky whores to have them show up while you are sleeping and then start flashing knives around. (and another special photo)

Sharon didn't know about the murder of Bobby Kennedy. You see Bobby Kennedy was killed by another fucking loon named Sirhan Sirhan. The fact that Paul Tate was in intelligence was WIDELY reported actually, moron. I mean, I don't even have to take your position apart, the normally complacent housewives of KTS are kicking it to shreds as I speak.

The SEVEN victims of TLB were killed by Tex, Sadie, Leslie and Katie. There's no question about that. And they were loser, stoner hippies.

My search is for WHY they were killed. NOT because Charlie was a hitman. NOT because of any bullshit the BUG picked out of his ass. It could be as simple as a damn mistake, thinking Terry was there.

But please Mr. Moron- you people are sick and need help. Stop spreading your lies and bullshit on the web.
Posted by ColScott at 10:46 AM

I don't know where he's coming up with all his theories, but they're from left field, to put it mildly lol

I think it's pretty well established that Manson knew that Terry Melcher had moved out of Cielo already...

I think it's possible that there was some sort of "hitman" aspect to the LaBianca part of the story...albeit not CIA or shadow government inspired...

Hmmm, perhaps there is more to this as now Bugliosi writes a 1600 page book trying to dispel JFK conspiracy theories...what would he have to hide? Perhpas he is a high-ranking member of the shadow government....