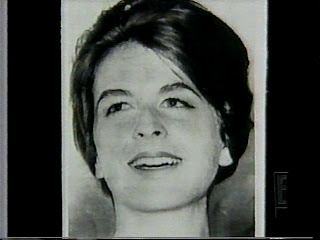 Ines Mejia Folger
Ines Mejia Folger Known to her friends as "Pui", died peacefully on July 15, 2007, three weeks after celebrating her 100th birthday. Born in Piedmont, California on June 25, 1907, she was the sixth and youngest child of Encarnacion and Gertrude Mejia, both of whom were born in El Salvador. At the time of his youngest child's birth, Mr. Mejia was the Consul General for El Salvador in San Francisco. After attending the Convent of the Sacred Heart in San Francisco for the primary grades, Mrs. Folger was sent to Europe at the age of 12 to attend schools in Paris and London. During her schooling in Paris, she witnessed numerous historic post-World War I events, including the pageantry surrounding the burial of the Unknown Soldier beneath the Arc de Triomphe. She finished high school at the Convent of the Sacred Heart in Menlo Park, but was denied a diploma because she had helped a classmate elope in the spring of their senior year. In spite of the lack of a diploma or further formal education, her curiosity about people, places, and events made her a life-long learner by reading widely, traveling extensively, and meeting as many people as she could of all nationalities and from all walks of life. She never lost her love of France, taking French lessons well into her 100th year so she would not lose her accent. Mrs. Folger was married in 1933 to Peter Folger. They divorced in 1952. She had two children, Abigail and Peter. Her daughter died in 1969. Mrs. Folger was involved in numerous civic activities. Among others, she was a founding member of the Patrons of the Arts and Music at the Palace of the Legion of Honor and a member of the Board of the San Francisco Museum of Modern Art. A project that gave her great satisfaction and was reflective of her commitment to being involved in the events of her time, was working at the Haight-Ashbury Free Medical Clinic in the mid-1960s. Besides her son, she is survived by her daughter-in-law Barbara; six grandchildren and five great-grandchildren. A private Funeral Service occurred on July 18. There will be a Memorial Mass at 4:00 pm on September 17, 2007 at St. Ignatius Church, Fulton & Parker Streets. In lieu of flowers, the family requests donations be sent to the Abigail Folger Lib- rary Fund, Santa Catalina School, 1500 Mark Thomas Drive, Monterey, CA 93940


[[Some Thoughts....Woman lived a long ass time...nice...could not find ANY pics of her anywhere...shame.... Family never addressed Abigail's murder- look at the comment in the obit that she merely "died"....good luck to the family]]
Posted by ColScott at 10:51 AM

I guess the Folger family felt it was better to remain silent than to help make these killers bigger media icons than they already are.

I should know this but don't: Peter Folger, her husband, is he alive or dead?

Peter Folger died a long time ago. I think some time in 1979 or the early 80s and they had long been divorced. They got divorced in the 50s some time

ARTICLE WITH PICTURE OF INES:

Friday, July 27, 2007
Days after her 100th birthday, Ines Mejia Folger greeted a friend who arrived at her bedside.

The centenarian had only recently given up French lessons to maintain her accent and had employed a personal trainer well into her 90s.

But now she was bored.

She couldn't continue to read; her eyesight had failed some time before, and she couldn't play a hand of bridge. But she could talk, Ms. Folger told her friend John Drum, so maybe she could advise people.

Ms. Folger, known as simply Pui to everyone who knew her, died less than two weeks later on July 15.

Her wise counsel, however, was not lost. The San Francisco native guided generations by example for decades, living life with enthusiasm, curiosity and a large measure of gusto while overcoming a very public and horrifying tragedy, friends said.

Her daughter Abigail had died 38 years ago at the age of 25 -- one of the five people killed by followers of Charles Manson at the Los Angeles home of actress Sharon Tate on Aug. 8, 1969.

"I just don't know how she got through it," said Joan Chatfield-Taylor, a friend of Ms. Folger's over five decades. "She was open about talking about it. And she never lost her sense of humor. It helps when you have one million friends," Chatfield-Taylor said.

Ms. Folger was born Ines Mejia in Piedmont in 1907 -- denied a San Francisco birthright after her family was displaced by the 1906 earthquake.

Her father was the consul general for El Salvador and she spent much of her youth attending schools in France and England.

Decades later, she would enthrall friends at dinner parties with stories about the burial of the Unknown Soldier beneath the Arc de Triomphe in Paris and other post-World War I events -- "things that came right out of the history books," Chatfield-Taylor said.

She returned to finish high school at Convent of the Sacred Heart in Menlo Park, but was ultimately denied a diploma because she helped a classmate elope.

In 1933, she married Peter Folger, a member of the coffee family. They had two children, Abigail and Peter, and were divorced in 1952.

Friends described Ms. Folger as the center of attention and the liveliest person in any room. A voracious reader, she was curious about a wide range of topics and had opinions on virtually any idea that was raised at a dinner table.

"She didn't spend her time being shocked and disapproving," Chatfield-Taylor said. "She was always interested in what was going on."

In the mid-1960s, when she was in her 60s, Ms. Folger worked in the Haight-Ashbury Free Medical Clinic.

"It was a profound experience for her," he said of the encounter that happened at the San Francisco Opera. "She said she looked into his eyes and saw his soul and such humanity."

Ms. Folger was a founding member of the Patrons of the Arts and Music at the Palace of Fine Arts, which eventually evolved into the Fine Arts Museum Board. She was also a board member of the San Francisco Museum of Modern Art.

Ms. Folger was a fan of San Francisco gossip and "terribly up to date on it," Chatfield-Taylor said.

"She was in society," she said, "but she didn't take the social scene that seriously."