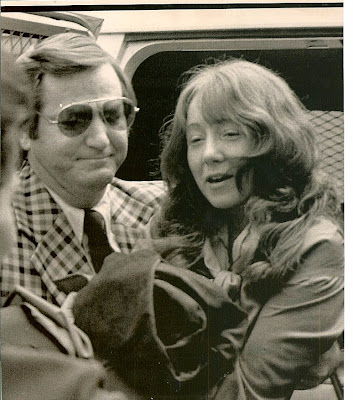 It's pretty damn cool to look at these old photos in a vacuum and wonder what people who saw them might think if they had no idea wtf was going on.

Like show this one to your pals and ask about the lady in the picture who looks so happy. Was she

1- Rescued from the Arctic after her plane crashed and she was forced to eat her kin.
2- Just finished a free nationwide tour brought to you by Diet Pepsi
3- Finally found her birth mother after a decade long search
4- Sees her presumed dead Army husband in the distance and is about to run to him
5- Is at the courthouse for trying to kill the President of the United States

They'll guess wrong every time!
Posted by ColScott at 8:02 AM

ha! I love the Col's imagination.

I think that lovely smile is brought to Squeak by the viewing of a Disney movie in the County Jail. Have you ever seen a crowd leaving from a Disney film? They are always smiling and content.

Charles Manson said: I was a half-assed nothing who hardly knew how to read or write, never read a book all the way through in my life, didn’t know anything except jails, couldn’t hold on to my wives, was a lousy pimp, got caught every time I stole, wasn’t a good enough musician to hit the market, didn’t know what to do with money even if I had it and resented every aspect of family life. But a week after Sadie’s [Susan Atkins’s] story, I was a charismatic cult leader with a family, a genius who could program people into doing whatever I asked of them. Shit, if there were any truth to what I was said to be capable of, I’d have been sitting in Hearst Castle with stereos in every room, listening to my own platinum albums.

Col? When did CM say this?

If nothing else it show us that CM is something of a genius with words.

in the Emmons book