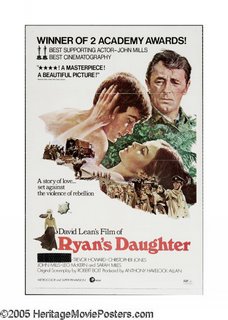 Ryan's Daughter shipped on DVD this week. This beautiful film is an interesting failure in the career of major director David Lean. The two disc DVD is worth a look. Put it on your netflix.

Why, since this Official Blog only deals with subjects of direct interest, is this on site? Because the film was the high water point in the career of pretty boy actor Christopher Jones.

Jones was the Brad Pitt of his day. He starred in only a handful of films. And then, soon after this film, he disappeared from Hollywood. GONE. Next spotted in the eighties homeless on Sunset Boulevard asking for change.

The E True Hollywood Story did a piece on him four or five years ago. It was good stuff. Catch it if it airs. You'll see a studly, handsome man slowly lose his mind.

The Col went to meet Jones in the Valley a year after the piece aired. The story as aired only hints as to what caused his breakdown. Jones was very upfront about it with me- he was having an affair with Sharon Tate before she met Roman. They stayed friends. He loved her. Her murder flipped him the hell out.

There is a Yahoo group about Chris and some sites about him you can link to through the shitty IMDB service.

But watch the dvd and you will wonder at the career that could have been his.

The Col has spoken.
Posted by ColScott at 9:18 AM

I had an Uncle that did this. He was a college professor. Lost everything when he lost his mind. He died in the desert a homeless man.
Bren :)

I did hear of Christopher Jones and Sharon..I forgot his name, but did remember her dating someone in Hollywood, before Jay.

Yes, Sharon dated Philip too - he beat her and she left him.

Holy cow Christoper Jones from Wild in the Streets. I thought that was his only film.