Funny and Freaky and Slightly Wrong 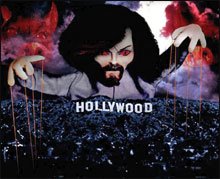 The Col just finished watching his dvd of LIVE FREAKY, DIE FREAKY. This should be my review of the dvd. But I am not sure what I think. Hey I know, kids, how about two reviews? Excellent idea.

If you are well versed in the lore of TLB and have a sense of humor, you will LOVE this film. Done entirely with puppets, filmmaker John Roecker has a sick, twisted sense of humor- which you really need with a subject like this. He's not telling a story that's remotely trying to be accurate- Charlie is called Hanson, Sadie is Hadie, Sharon is Hate. Jay/Hay is gay. Voyteck is unnamed and survives the slaughter because he is too boring. The LaBianca characters are building supermarkets in the desert. If you know the general story and are in a good mood, maybe even stoned, you'll laugh at the madness. This is not a healthy film, but the Col laughed a few times. I thought the musical numbers were the best thing in it and the Creepy Crawl song was awesome.

The film advises you NOT to watch it if you are easily offended. It is wildely offensive. Puppets have penetrative sex. The victims are made to seem deserving of their fate. If you have no sense of humor you will hate this film.

In general, it is an insane idea to have Charlie as a puppet. So insane it is brilliant.

Might be worth putting it on your netflix. It came out last week.

[[ Funny note for regular blog readers - the hapless puppet "Steve Apparent" arrives at the Sharon Hate Mansion with a box full of $5,000 worth of drugs for the naked gay Jay character. He gets his money and then is thrown out of the house. He stands up and talks to an unseen "Hex Watson" and says "Hey guy, you wanna buy a clock radio?" before he gets stabbed. See Heaven, people DO find that odd!!!]]
Posted by ColScott at 7:11 PM

They have dolls of the Manson Family--but a puppet movie? Sounds kinda creepy. I think I'd need some opioids to get through that one, lol.

Anyway--What do you think about the photo on the right...Doppleganger or actual Son of Manson? See for yourself. His name is Matthew Robert, he claims he is CM's son. He was a guest on Howard Stern about 2 years ago, where he talked about it, and how his friends in high school would freak out when they met him. He realized that he did look like Manson and the time frame of his birth fits, along with his mother's claim that she hooked up with CM back before the murders. His band is called "New Rising Son" Here is the link to his site...

I think I'll pass on this movie...
It sounds stupid...

Col baby, people can find it odd if they wanna.. I don't... I once had a friend of mine show up to my house at 2AM to sell me his car lol

He's not gay, I'm not gay.. I'm married.. He was just going around to all his friends trying to unload this car...

No sex was involved...

is this the movie with the voice of Green Day's Billie Joe Armstrong as Manson?

Matthew Robert named his band New Rising Son? That's lame. He's got a forehead like a drive-in movie screen and his 'claim to fame' must surely cave in on itself.

Read Bobby Beausoleil's "I'm a casualty of the Sixties, only I'm still alive" interview with 'Seconds' Magazine (online)and tell me that that interview isn't one of the most intelligent, thought provoking Rock interviews ( if I may call it such ) that you've ever read anywhere, any time of your life.