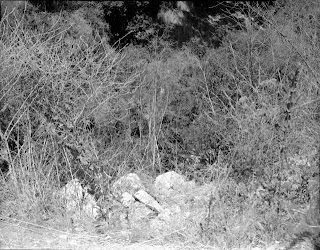 What do you all think?
Posted by ColScott at 7:41 AM

Did Bobby do that girl? Nope, I don't think so. Sounds more like Bundy, who may or may not have been active in the Bay Area at that time. The Zodiac was active too. Imagine being a teenager in the bay area back than. Wow, we had lots of boogymen to scare us! Parking was a double adventure, lol.

Hmmm, this reminds me of something. Hold on, be back in a bit...

On Sunday, August 3, 1969 the body of a murder victim was found by hunters near a quarry on Highway 1, south of Lompoc. The victim's identity was not established following a lengthy investigation, hence the "Jane Doe" identity. She died from multiple stab wounds.

Jane Doe is described as being a white female between 16-25 years of age, approximately 5'4" tall, about 125 pounds and medium-brown colored shoulder length hair. Jane Doe had pierced ears, current dental work and most notably, "bucked teeth". Jane Doe was wearing what appeared to be home-made clothing with a flower print. The clothing appeared consistent with that worn by youth during this time period.

Jane Doe's remains were buried at the Lompoc Cemetery in 1969.

Sue Grafton's newest novel, "Q" Is For Quarry, is loosely based on our investigation into the murder of Jane Doe 1969.

If you have any information which could lead to the identification of this victim, please e-mail our detectives at: detective@sbsheriff.org

And so now it may be the Frenchman who is involved after all?

Where was Mr. Reverend Davis during that time?

AC, I had exactly the same thought.

I liked the line of reasoning that makes the case for Jane Doe being the English girl from the Hinman house. Would explain why she needed to die.

If you've seen Austin Powers or have seen an interview with Shane MacGowan, you know about English dental hygiene. Another interesting line of inquiry: remember when Dennis Wilson was paying for all of these girls to get their teeth fixed, and he supposedly ran up over a 100,000 in medical and dental bills? 19 fillings in the last two years? That sounds like a lifetime of cavities being filled in a short time. Where did this girl suddenly get the money to have all of this done at once?

Ok, so Bobby, who already had killed at least once, was already in jail, but just for the fun of it, why don't we wonder what it would have been like for Bruce Davis if he was indeed the Zodiac killer, but Manson decided not to send him out on either Tate or LaBianca?

Dennis Wilson was paying for all of these girls to get their teeth fixed, and he supposedly ran up over a 100,000 in medical and dental bills?

Humm........ DW was a very nice guy then....right ?, he was trying to help all those lost girls with health problems and he spend a lot of his money probably in a very altruistic way...
congratulation DW you were a very nice guy
....you where just unfortunately in the wrong place at the wrong time , because those girls where CM friends...and plain sick ...!

I did some reading over at the other forum, and I came across some good stuff that refutes the nifty theory of this jane doe being the person who answered the phone at the hinman house. The cops tested susan on her ability to fake an English accent, and she was able to do so convincingly.

That doesn't rule out the notion that this girl was english though. And then of course we think of The Process, Bruce Davis's little trip overseas, Scientology, doreen gaul, Joel Pugh.... Uggh!

The.sharp Gaul murders were gruesome. Did one person do them? Each victim stabbed 60 times, each one with the right eye gouged out.... Doreen raped. All those other murdered girls. There was definitely a monster on the loose in 69-70 California.

We always go back to Bruce Davis, since he was free during that period, but manson himself hints at unsolved murders and a murderer still at large. Bruce and bobby are in prison. Is there another presumably male associate who was never charged who could be this person? Or was it someone known by Manson outside the family?

So I'm kinda wondering where everybody has gone as well...Seems pretty quiet when there is a 40th anniversary comin up.

And for anyone who doesn't believe the Bugliosi version, something new to consider from Jesse Ventura:

hey pristash, how are you doing? I heard that jesse ventura quote when it first aired. had my back turned to CNN while I was working on my computer and I was like "whoa!"

anyway I'm curious what you mean by putting it in the context of not believing the Bugliosi version?

Please consider for a moment: If the former governor of the great state of Minnesota can get former VP Dick Cheney to confess within an hour to the Tate murders, then why stop there? Why not Joel Pugh? Or Jane Doe 69 or whatever she is called? Hell, the Zodiac murders are still unsolved too! So, I wonder, could Dick Cheney, who admittedly knows an awful lot about torture, been running around the Bay area and SoCal during the years 1966-69? Where was Dick Cheney then? The only thing I know for sure was that he sure as hell wasn't in Vietnam!

I caught that too. Pristash..good point & hilarious.
No posts going on about the burning of Barkers. Does Col have a lead? I might have a few suggestions......'Lil

How Did He Do It?

Pristash, I think I get you. and I hate to echo someone like Sandra Good (because I do think Manson is guilty) but isn't it ironic that we have Manson locked up and vilified while the "Dicks" of the world are running loose?

On another note, I wonder what El Coyote will look like this summer on the 40th...

I don't think the persp are in question, just the motives.

I, for one, will finally watch my copy of "40 years of Helter Skelter" on Friday, kicking off the 40th anniversary summer... I see GoRightly has a new version of his book for sale, if anyone has a copy, please share whether it is worth buying vs the original. Also, any news on other books coming up?