Quick, catch this before Bret takes it down…. It’s the Manson girls singing. There’s Brenda/Nancy, last seen selling pottery in 1999 in after her murder stint. There’s has she really renounced Charlie? Blog comments do not count as news. There’s Cappy. Did Nellie really visit her in the desert? And then there’s….? Bret says it is Kitty Lutesinger… but didn’t she testify AGAINST everyone? The photos of her I’ve seen all show a longer face. Though come to think of it, when I met Bobby’s daughter Jene last year… I can see the resemblance. So maybe it is her. Bret intended it as a Christmas special, so enjoy it while you got it. It’s from a new tape of period footage that he unearthed. I bet it is amazing.

Edited- It is Her 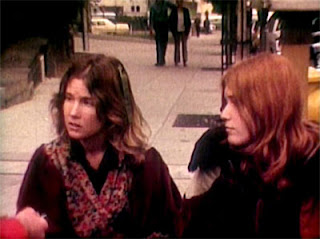 Kitty appears to be uncomfortable in this clip. Does anyone know what she has done with her life?

As I understand it, Kitty kept drifitng in and out of contact with the Family even after the trials and sentencing.

This is an interesting clip and we should try to date it. That should be possible by reference to hairlength and the incised X's. The other girls have (regrown?) hair and clearly visible X's - Kitty has long hair, is smartly dressed and has no apparent X. Maybe she was just visiting friends when this clip was shot?

I mention this as I'm fairly sure I've seen other pics of Kitty sitting with the girls outside the courthouse with an X on her forehead. Comments, anyone?

Meanwhile a research job that is crying out to be done (if it is possible, that is) is to get all the clips and photos scattered around the Internet in some kind of date order. Bret's is one super site, with fantastic photos, but it sure would be nice if more of the pics were captioned with who/where/when, etc.

Just a suggestion, in case Bret is reading this.