One Pill Makes You Stupid 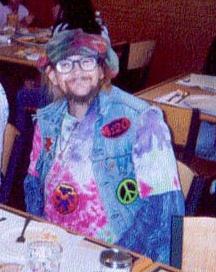 The sad little fool to the left is Larry Melton, known to many as White Rabbit. He was not a very well known member of the Family, a fringe player at best. That photo was not taken back in the day but was actually a recent thing. Scary. Allegedly Melton specialized in sex with underage girls. I bet they just flocked to that lovely face.

For some reason I got more than one email asking about him this weekend. Yahoo KTS has someone talking about him and Yahoo Manson and The Family has some argument going on about him.

He shows up briefly in Sander's mess of a book THE FAMILY and is referenced in GoRightly's unsold book THE SHADOW OVER SANTA SUSANA PASS. Most experts in the case, including the Col, don't think much about him because he doesn't know anything, is a fool, and is a waste of time.

The only interesting thing he ever did was take one time Case Expert and one time registered sex offender Bill Nelson and convince him he knew where there were three bodies buried behind Barker Ranch. Likely some of the 35 other murders The Bug keeps accusing the Family of without prosecuting anyone for. So Nellie got the Park Rangers and wasted a lot of time and money to dig up a lot of sand. July 27, 1998.

Nellie's explanation? "We had to." Uh huh. Read about it HERE .

If you wanna see what happens when a loser like Rabbit tries to take on Sandy Good, try here .

No I don't know where he is nor do I care.

He has managed to fool a lot of fools. Good for him.

He has nothing relevant to add to the study of TLB. Back down the hole Rabbit. The a**hole!

THE MANSON SNITCH: It almost seems sacrilege doesn't it? A snitch in the Manson family? But it is true. What has he told me, the Inyo County District Attorney Chief Investigator, the Inyo County Sheriff Office, the Park Rangers? He testified he saw Charles Manson shoot three teenagers, right between the eyes...bam - bam - bam! It was just before the October 10 & 12, 1969 raids at Barker Ranch. The three teens, two boys and one girl, tried to leave the Manson family. After getting about a mile down Golar Wash, Manson sent Bruce Davis after them to bring them back. Manson told the snitch, Susan Atkins and Bruce Davis to dig a hole. When the hole was dug, several feet deep, Bruce Davis said, "That's enough." All three diggers went around the Barker Ranch house and let Manson know the grave was ready. There was a conversation between the three teens and Manson. After Manson shot them, the snitch and Bruce Davis carried the first boy to the grave. Then Bruce and Sadie brought the other boy to the grave and they returned for the girl. All three victims were in the same grave.
The snitch guaranteed me and the Inyo County officials he could lead us to the sight. He changed his mind at the last minute and bailed out on us. Many hours of digging up at Barker, with the Death Valley heat up around 123 degrees.
After the snitch returned to his probation state he told me he got XXX at the cops. "F--- em!" said the snitch. I assure you the law enforcement officials gave him the utmost courtesy during his four day visit to California. He received a free flight. His room was paid for and he got money for meals. They even treated him professionally after they figured out he had bailed on them. The snitch has no right to complain. He chose not to honor his agreement with the Inyo County officials. He even received immunity in writing. All he was required to do was tell the truth. He did not. We were concerned about his safety. Would he be threatened by loyalist of the Manson clam? Could he be killed? Perhaps. We fear for him no longer. The snitch decided to make duplicate prints of his photographs while in California. He has forwarded a set to none other than Sandra Good, better known as Blue. He also did another strange thing. He signed the guest book at Barker Ranch with his given name in the Manson family. If he were afraid for his life, he blew the opportunity to remain safe. PHOTO ALBUM
He was a real member of the Manson family. He even asked the officers who interviewed him if he could change his clothes. He came back with a Manson shirt on. He had also made a new X in his head to honor his visit to California to snitch against Charlie.
He may know about Marina Habe. He claims to know about Doreen Gaul and James Sharp. He does know about Zero and why he was murdered. But he has lost his place as a snitch. He lied. The one thing a snitch has to offer is truth. Take that away, and he gives up his value for information. It did not have to be that way, but as my friend Doris Tate said often, "Once having chosen there is no turning back."
An e-mail writer told me where Cappy and Ansome had moved following the death of T.J. I told the snitch where they are believed to be, and he is transferring his probation from his state to California. It was a costly ordeal to the Inyo County law enforcement officials. They did not deserve it. The snitch even asked me to write Mr. Bugliosi and tell him of his information. I did so, and Mr. Bugliosi called me the night after I returned from Death Valley. I had informed Deputy D.A. Kay at his request too. We were all so hopeful.
Bruce Davis has told his parole boards he would give up any bodies, if he only knew where they were buried. Right Bruce! But it was Clem who gave up the burial site of Shorty, not you.
At the suggestion of a CIW prison official, I wrote Susan Atkins a letter telling her she was implicated in the murder of three more people. Susan claimed during the trial..."There are three people buried behind Barker Ranch about eight feet deep they will never find." It will soon be a week since I mailed that letter to Susan. There has been no response.
Are there other Manson family members out there reading these pages? Why not come forward and break the silence? All you have to be is honest, true, and give up those bodies we all know about. We recognize it will take more than a conversion to Jesus Christ. If that was all it would take, then Bruce, Tex, Susan and Gypsy could have come forward years ago. ]]
Posted by ColScott at 7:01 AM

Wow,
Great information. I am thoroughly impressed by the extent of your research. Great job on this post!
Peace & Love,
SleepyDiane23

Wonderful post! White Rabbitt is a fungus on the heels of all humanity and I HATE his guts with a passion! May the bird of paradise fly up his nose! lol

hey white wabbitt is a blot on the face of the hippie-rainbow movement....
his claim to fame was that he hung out w/charlie manson...that is nothing to be proud of!!! now i hear he is the pedophile extraordinaire who likes underaged girls...
this guy is a sick puppy

hey white wabbitt is a blot on the face of the hippie-rainbow movement....
his claim to fame was that he hung out w/charlie manson...that is nothing to be proud of!!! now i hear he is the pedophile extraordinaire who likes underaged girls...
this guy is a sick puppy

hunter said...
after quizing the national database people, he has had three convictions for selling and distributing pictures, and having sex with a minor, using the larry melton name, he has one conviction for porno from michigan using the name joseph (joe) gallager. first time he received 7 years probation, with no contact with children or use of a computer, second conviction was sex with a minor (erica blackwill) and distributing and selling of pictures of a minor. he has had his probation revoked once on the first case and has violated his probation on the second case with use of a computer and trying to contact the minor in question. and currently has a warrant from texas for the second case, also in hardin county texas he has two warrants for drugs. if anyone does find him or his where-a-bouts please call dps in texas, they would very much like to find him. his case in michigan was also a probation case, before the national database was in force for all pedeophiles, and they are also looking for him to get him to register in that state. and they have been notified of the name usage, but the picture and prints match perfectly. dragonman

here is a more recent picture of the pdeeophile
http://i105.photobucket.com/albums/m238/ThaPeepaBill/6c4561e0.jpg