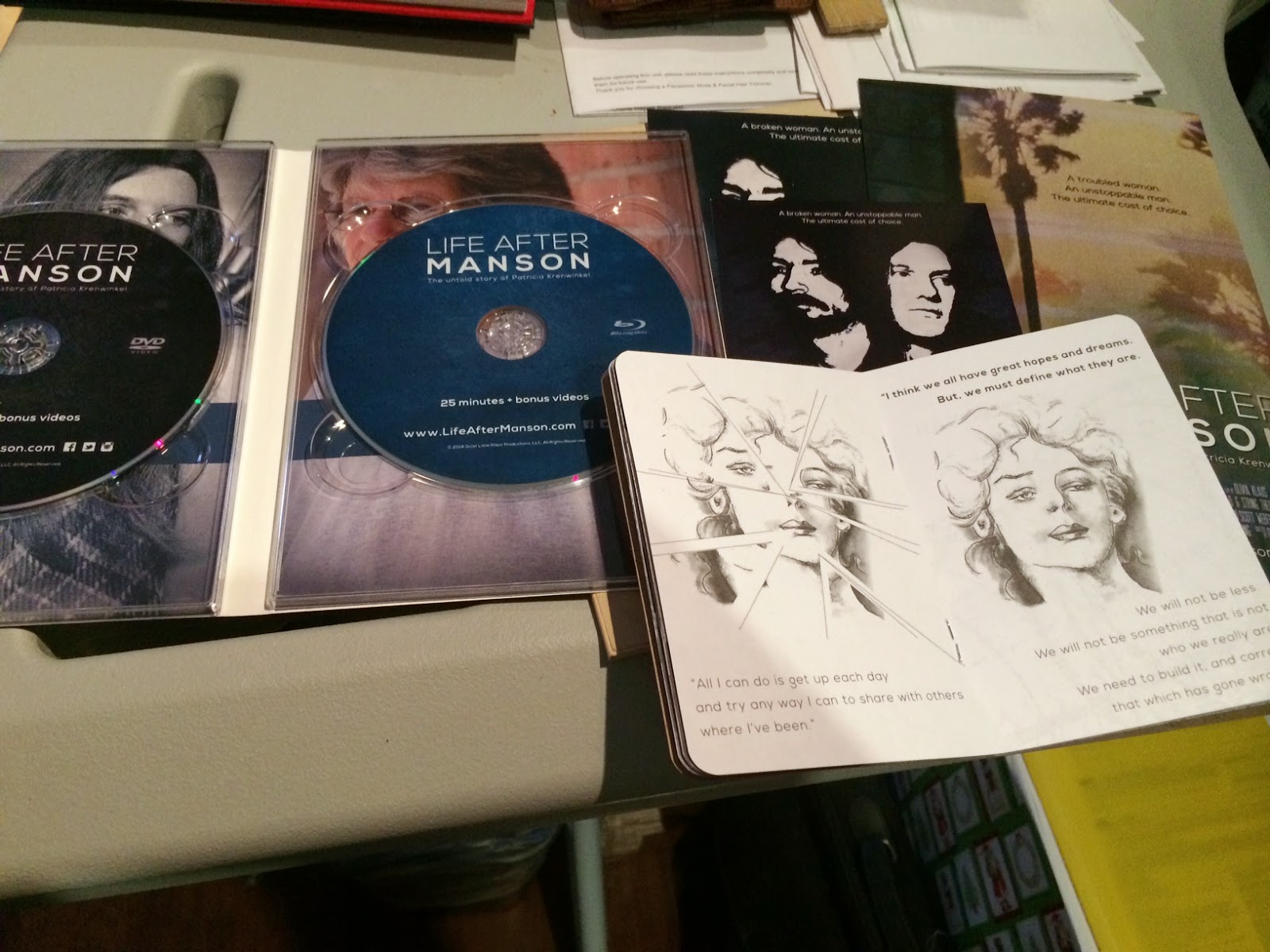 I'm still waiting on my deluxe package. Seems like it's been ages since I ordered it. Looking forward to your critique!

Please post more of your collection. I appreciate the trouble you have gone through to scan and save it. There is value in all of the documentation, no matter who posts it.


I wonder if this is done with the intent of trying to garner sympathy?

I would imagine so if it has her participation...

" No life after Manson"

That about sums it up to me lol

I think the intent is to grieve after the tragedy, for me it was a tragedy first for the victims of course but also for those young people who lived in the Family and went mad and depraved. Humanly speaking it was a tragedy for all of them.
One of the reasons we are all interested in this case is to understand how so many young and beautiful people ended up living like that and doing what they did.

"to understand how so many young and beautiful people"

Don't hate. If everyone was scrutinized and judged by the worst drug and alcohol induced act that they were apart of, none of us would come out very clean.
It would probably be wiser to try and understand how an otherwise good person deviates towards their darker nature. Which happens quite frequently in Amurica by the way. A violent country produces violent citizens. Go figure.

Louis you have a high standard concept of beauty man...i meant of course they were not like hollywood people but in my opinion they were not ugly-ogre-like. Anyway i knew i was going to be questioned about this, don't know why i even posted it. But it's my opinion, and i think you might know really beautiful people or you don't really know what ugly people look like.

Hey Tom, you say 'don't hate' but never fail to slam America in nearly everything you write. .Find some political blog to spew your anti-America hate, hypocrite.

I never one time slammed Amurica. Just questioned your "exceptionalism"....your recent inability to win wars.....your endorsement of torture......your inhumane treatment of inmates.
Other than that, we cool.

And don't call me a hypocrite. Whore.

Tom - aren't you from Jersey??

I know that unless you are a fan of the real housewives and Snookie...

Most people I grew up with in Jersey have more class than talk to a lady like that...

You're right. I take it back. In fact I tried to delete it, but didn't know how. Too many bud lites. My bad.

Ahh...Saint, you're one of the good guys, and I appreciate you.

A Very Happy Thanksgiving Holiday to Col and all the readers here at the only official TLB site :)

Happy Holidays to you Col and all at the Official TLB blog...

Interesting article... you may also be interested in reading a fascinating new book just published this week... Manson, Sinatra and Me: A Hollywood Party Girl's Memoir and How She Helped Vincent Bugliosi with the Helter Skelter Case...
http://www.amazon.com/Manson-Sinatra-Me-Hollywood-Bugliosi/dp/1771432055

Where are you Col. We're all waiting for new post's haven't even seen you commenting on other blog's lately

The lack of humanity and empathy in many of these comments is a good pointer to contributing factors in your/our culture to the perfect storm that lead to these seismic and tragic events.Tragic primarily for the victims and their loved ones granted,but not all of,if any of the perpetrators were born evil.Tortured human souls,as are evident in the repentant old women who are clearly not the girls that entered those facilities are no cause for celebration or gloating.A need to understand would serve more useful than a need for retribution,leave that to those for who that is at least understandable,the victims family and friends.

Physically some of them were outright gorgeous , Bobby, Ruthanne,, Paul. Some were cute Leslie,Nancy, Sadie, Bruce, Sandy, Sherry,Gypsy and Snake. The others were either plain or not ugly but not Stunning either.

ALFREDO PIACENTINI. DECALIA ASSET MANAGEMENT. said...
This comment has been removed by a blog administrator.
3:24 AM, April 04, 2016

ALFREDO PIACENTINI. DECALIA ASSET MANAGEMENT. said...
This comment has been removed by a blog administrator.
3:24 AM, April 04, 2016

It's been a few years, Col, since you last put up an entry. Are you going to let your site die?

This is America...we speak English around here. A translation would be nice.

you may also be interested in reading a fascinating new book just published this week... Manson, Sinatra and Me: A Hollywood Party Girl's Memoir and How She Helped Vincent Bugliosi with the Helter Skelter Case...

It's a fairly atrocious book. I'm glad that I read it in the same way I'd be glad to slit my arm with a piece of jagged tin to get the poison from a snakebite out.....

And a lot more besides !

Yes, well there quite a few good looking women where I live. Many of them come over from Quebec...:)

I have been reading this blog all week thanks to my new understanding of the Tate- LaBianca murders. Wish this was still going, but want to that Col SCott for all his hard work!

This is America...we speak English around here. A translation would be nice.

"This" (being either this forum or the people who write in/on it) is most definitely not America. Your thinking that it is merely demonstrates your insularity.