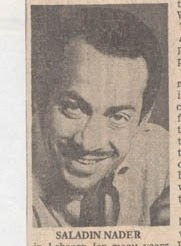 Nader NEVER made sense in her version. Still doesn't.
Posted by ColScott at 7:59 AM

What a half decent, comptent defence would have done; get the number of the apartment Chinzilla claimed to knock on, find out who lived there at the time, ask them if on the night in question a drugged out hippie girl with a chin you could hanf your coat on had knocked on their door asking for Nader.

agreed
Or even ask the janitor if anyone took a deuce on the stairway or not. Should have remembered that.

Exactly...which begs the question: if it didn't happen, why would they actually make up such a story which could easily be discredited...?

What if BUG made it up, fed it to them and they just never refuted it?

It's possible...but I don't think I would take that chance...would you?

Bug took a chance on a fairy tale motive and won...

Again, Col, the HS motive is only fairy tale because in all liklihood it was NOT the reason that at least 9 people were murdered in SoCal in 1969.

However it's power cannot be discounted...we have numerous sources who swear that CM was obsessed by it for months...and although mis-spelled it was even written in the blood of one of the victimes on a refrigerator at the crime scene...a fact that had the police publicized would have led to a Spahn Ranch raid within 24 hours of the discovery of the bodies on Waverly Drive.

So, no Bugliosi found a leg to stand on with HS. The other story could easily be refuted by a defense attorney or even a newspaper reporter so inclined to do so. So I believe it would be risky to make it up. Perhpas one of the DA investigators verified the story, no?

I asked that question ages ago: that surely the cleaner would have remembered a delightful find like that on the stairwell and that would have been excellent corroborating evidence for Bugliosi, proving that at least one thing Linda siad was true plus it could have spun to make Sadie look like an animal instead of a terrified girl with bowels relaxing in relief that they're not going to do it. Or in fear before Linda knocked on the door, could have been that way around. (Young inexperienced burglars often crap on the floor in a mix of fear and class attack).
anyway, I thought that Bug would have chased this up, at least spoken to the cleaner, but when I mentioned this, I was told that this area was fairly crap and finding a shit on the stairs wouldn't be so memorable. Some drunk on the way home might have done, that'd be the cleaners attitude and he wouldnt recall it specifically.