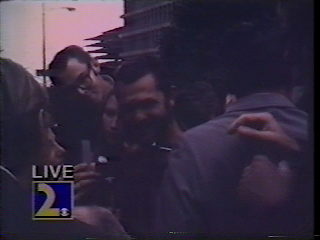 I've gotten a few emails asking about Bruce Davis' upcoming parole hearing. It's like his 592nd and he's married and has a stepdaughter and would like to be set free into society again.

The argument I hear most often is that he hasn't owned up to these other murders and therefore doesn't deserve release into polite society. Doreen Gault, Scientologists, Joel Pugh, etc etc.

Personally I don't even know if he's guilty of any of these others. It feels like this is just BUG weaving a tapestry of masturbatory lies and fantasy. BUG knows a convicted murderer has no claim for defamation, so he alleged whatever the fuck he wanted to in his novel and it has taken on a life of its own as the "Official" story.

That's not to say that Davis is a hell of a nice guy or anything. He for sure was there at Hinman. He for sure knew all about Lotsapoppa and TLB. He for sure was intimately involved in Shorty Shea. And if nothing else, he confuses the shit out of me in the Hendrickson documentary because he looks and sounds like Charlie.

But I don't really care to fight his parole hearing.

You see, I've always been firm in my belief that none of the men are getting out. Not in this day and age. Maybe when they had their first parole hearing.

But the Bug-based legend of Manson is now fully permeated throughout the culture. It's done for these guys. Clem/ Adam Gabriel managed to convince people to release him in the middle of the night because he was not in his right mind. What that shows me is more about how fearful the authorities were that Shorty might still be alive than anything else.

No one is letting a member of the Manson Family out ever again. Orca Tate can come get her 30 pieces of Silver TV Fame at each hearing, but it ain't because of her that Davis will be denied.

He can thank his old friend Charlie.
Posted by ColScott at 8:18 AM