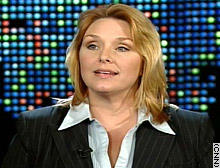 This morning Heaven attacked Roman as she always does by lying that he slept with two women a day after Sharon's murder (if this were fact do you think the lawyers for Conde Nast would have ignored it?) and then bringing up the intercourse with Samantha Geimer. She says everyone grieves differently. I say HOW DARE YOU JUDGE THE EMOTIONS OF A MAN WHOSE ENTIRE FAMILY WAS KILLED BY THE NAZIS AND THEN HIS NEW FAMILY WAS KILLED BY TEX WATSON!

Does Geimer want her support? From a 2003 Honolulu Star - Bulletin

"Yes, I'm that girl," Geimer says when asked if she's the one whom director Roman Polanski "raped" during a photo shoot in Jack Nicholson's Hollywood Hills home. The incident made, and continues to make, international headlines. "But it was a very long time ago, and I don't really understand why the media is still interested in me about this. No one in Hawaii seems to care."

The crime made Polanksi, charged with drugging and raping a minor, a fugitive. The director of "Chinatown" and "Rosemary's Baby" pleaded guilty in the case, but, faced with the prospect of up to 50 years of jail time, fled before sentencing to Paris, where he has remained exiled. France has no extradition laws.

Geimer and her husband, Dave, another San Fernando Valley product, left Hollywood 15 years ago to join her mother on Kauai. But that didn't stop the media from tracking her down, spending nights in vans parked outside her home waiting for any of the family to step outside, whenever there were rumors that Polanski might be returning to the United States.

REPORTERS' CALLS began again earlier this year when Polanksi was nominated for an Academy Award in the Best Director category for "The Pianist."

"How strange that reporters ask me if Polanksi should win this award because of what he did, or (if he should) be allowed back into the United States to attend the ceremony," Geimer says. "How strange that a woman with three children and a husband and living in a secluded spot on Kauai has to say, 'Just let the Academy members do their job.'"

"After the publicity came out, I knew it was just as bad for him as it was for me. I'm sure if he could go back, he wouldn't do it again. He made a terrible mistake but he's paid for it.

[[In order to avoid attacks I just don't need, let me answer what I think...What Roman did was wrong.. allegedly he didn't think so...it feels like the girl's mother fed her to him ala Michael Jackson...but what he did was wrong...his flight from justice to avoid a vengeful judge after a deal was already made I fully support...and why is this different from Bill Nelson? Well, Bill still claims he didn't do anything AND has the nerve to sit in judgement of other people, no matter how bad. Roman just makes amazing films.]]

if you feel what heaven said was wrong then you might want to take it up with greg king. it's clearly stated in his book. would you like the chapter and page number? it's not as though she pulled that out of thin air.

oh and when people decide they want to be a public figure and live their life famously then they are at risk for the judgement, ridicule and opinions of others regarding their actions. that's a risk you take when you decide to be a public figure. if it was against the law then johnny carson would have never left the courtroom. what heaven said was correct according to author greg king. so no she isn't lying. she was quoting someone else. for someone who says he's an expert you should have known that.

I am an expert....Greg King used Bill Nelson as a source...he never spoke to most of the Tates or Roman....therefore his book is not valid as a source for any reputable experts...it was so poorly receieved it never came out in paperback... so quoting him makes her a fool....as far as your second post, once again, you are right, and indeed ROMAN started this suit so the revalations are his problem....

ok i'll believe you about greg kings book. but it seems rather unfair to call heaven a liar when she didn't write the book. i explained to you yesterday that most people only know what they read. bill nelson is an idiot i'll give you that much but that isn't heavens fault.

from what i can see in the back of gregs book under source notes. he most certainly did consult the tate family and roman. one of the very first sources with a numbered footnote is doris tate. patti tate is there and so is roman along with alice labianca and janet parent. if you have the book you may want to look for yourself. i'm only correcting you because you said he never spoke to the tates or to roman and that isn't true.

oh and excuse me but yes it did come out in paperback.

also says paperback
you can even do this search
http://search.yahoo.com/search?p=greg+king+paperback+Sharon+Tate&ei=UTF-8&fr=FP-tab-web-t&fl=0&x=wrt

so i'm sorry to report colscott but you are indeed wrong.

ok i'll believe you about greg kings book. but it seems rather unfair to call heaven a liar when she didn't write the book. i explained to you yesterday that most people only know what they read. bill nelson is an idiot i'll give you that much but that isn't heavens fault.

Okay true enough but then don't repeat these things, no?