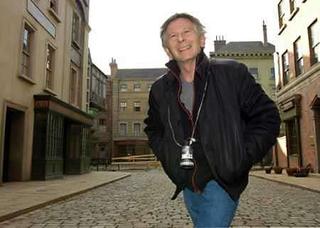 LONDON (Reuters) - Roman Polanski's personal life was put under the spotlight on Monday at the start of a libel trial in which the director testified via video link from Paris to avoid extradition to America for sex with an underage girl.

Polanski is suing the publishers of Vanity Fair magazine for an article in July 2002 alleging he tried to seduce a woman while on his way to his slain wife's funeral in 1969.

He was speaking from Paris to avoid the risk of extradition from Britain to the United States, where is he wanted after pleading guilty to having sex with a 13-year-old girl in 1977. He cannot be extradited from his native France for the crime.

Polanski had just admitted having "casual sex" with other women before and during his marriage to Tate, as well as once four weeks after her murder and at least one incident of having sex with two females at the same time, one of them aged 15.

"You are putting it in a grotesque way," Polanski responded, before proceedings were adjourned until Tuesday.

Lawyers expect the trial, the first in which a libel claimant has sued via video link, to last about a week.

Earlier in the proceedings, Polanski choked with emotion as he described his love for Tate, who was murdered by followers of the Charles Manson clan when eight-and-a-half months pregnant.

"Sharon was sweet, bright, brilliant. She had a great sense of humour ... she was in my eyes the perfect woman," he said.

The 71-year-old also described his reaction to reading the Vanity Fair article, which includes a passage quoting him telling the "Swedish beauty" he was trying to seduce: "I will make another Sharon Tate of you."

"I was in a state of shock," he said. "This was the worst thing ever written about me. It's absolutely not true. But I think it was particularly hurtful, because it dishonors my memory of Sharon," he added.

POLANSKI: A RESPONSE TO TRAGEDY

During Shield's cross examination, Polanski defended his promiscuity after his relationship with Tate.

"The death of Sharon ... was an immeasureable shock to me, and in such moments some people turn to drugs, some to alcohol, some go to a monastery, for me it was sex."

He also recalled the media reaction to Tate's murder, which he said implied that it was the moral bankruptcy of her and her friends that was to blame.

"I felt they were being assassinated for the second time," he said.

The jury watched a recording of a 1969 press conference Polanski gave shortly after Tate's murder and a 1984 interview during which he discussed sex and his days as a boy in Poland fleeing the Nazis at the start of World War II.

Both sides in the case now accept Polanski was not at the restaurant, as alleged, en route to Tate's funeral in Los Angeles, but was there within three or four weeks of the murder.

Vanity Fair says the gist of the article is still correct. Polanski says no such incident took place.

Polanski's lawyer, John Kelsey-Fry, drew a distinction between his client's sex life and the alleged incident in Elaine's restaurant in New York 26 years ago.

"This case is not about sex," he said in opening arguments. "It is about that breathtaking and callous indifference to her death and memory that such conduct would require."