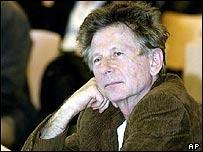 Roman Polanski, the film director, philanderer and fugitive from justice, broke down yesterday as he described his shock at being accused of seducing a beautiful Swedish woman while on the way to the funeral of his wife

Polanski, 72, who has lived in Paris since being caught in an under-age sex scandal in America in 1977, was said to have made his advances at a restaurant just days after his pregnant wife, the actress Sharon Tate, was slaughtered by the Charles Manson clan in 1969.

He said it was an "abominable lie" to say that he put his hand on her thigh, as alleged, and told her that he would make "another Sharon Tate" out of her.

The filmmaker, whose credits include Rosemary's Baby, Chinatown and more recently The Pianist, said the allegations, made in 2002 in the American magazine Vanity Fair, whose editor is Graydon Carter, were "the worst things ever written about me".

He made the comments to the High Court in London yesterday where he is suing for damage to his reputation.

In a British legal first, he was allowed to give evidence via a live video link from abroad, to avoid any chance of being extradited to the US. The jury heard that Polanski was working in London in August 1969 when his 26-year-old wife was killed with four friends at their home in Bel Air, California.

The article, celebrating the 40th birthday of the Manhattan restaurant Elaine's, claimed that Polanski stopped off in New York on his way to the funeral.

Quoting the author Lewis Lapham, the story said Polanski tried to seduce a young Swedish woman, to the horror of diners.

"The only time I ever saw people gasp in Elaine's was when Roman Polanski walked in just after his wife Sharon Tate had been viciously murdered by the Manson clan," Mr Lapham was quoted as saying. He said he was with a friend and "the most gorgeous Swedish girl you had ever laid eyes on" when Polanski asked to join them and began "inundating her with his Polish charm".

"I watched as he slid his hand inside her thigh and began a long, honeyed spiel which ended with the promise, 'And I will make another Sharon Tate out of you'."

The magazine has conceded that the event could not have occurred on the way to the funeral because Polanski took a direct flight from London to Los Angeles. But it claims it must have happened just after the funeral and stands by the details. It also says that Polanski, being a fugitive from justice, has no reputation to damage.

The director's counsel, John Kelsey-Fry, QC, asked him: "Is it true that you stopped off in New York and went to Elaine's on the way to your wife's burial?"

Polanski, who is remarried with children, said: "No, it is a lie."

Mr Kelsey-Fry: "Is it true that you tried to pick up or seduce a girl by exploiting the name of your late wife who had just been murdered?" Polanski: "It is an abominable lie."

Asked how he felt when reading the article, he said: "I was in a state of shock. That was the worst thing ever written about me. I think it was particularly hurtful because it dishonours my memory of Sharon."

He said: "Sharon was sweet, bright, brilliant … She was, in my eyes, the perfect woman."

But he agreed with Mr Kelsey-Fry that his relationship with Miss Tate had not been monogamous.

He said the first time he had sex after his wife's murder was about a month later.

Under questioning by Tom Shields, QC, for Conde Nast, the publishers of Vanity Fair, he was asked if that did not show "callous indifference to her memory?" "No, I never considered sex in those pre-Aids days as something harmful," Polanski said. "Quite the contrary. It would be callous indifference if I did so using Sharon's name …"

He said later: "It was all casual sex for years after Sharon's death. I was unable to maintain any lasting relationships after her death."

Mr Shields read out an extract from Polanski's autobiography in which he told how he had gone to Gstaad, the Swiss ski resort, the Christmas following the massacre and had seduced a number of girls from the local finishing schools.

Polanski said he had sex to prove his "continued existence" after his wife's death.

Roman looks pretty haggard doesn't he....
Maybe it is just me..but I think he has seen better days definitly..

no doubt...must suck to get old for a playboy...on the other hand he still has major talent. Check Out Oliver Twist Trailer.

I will..although, I have never been a big fan of that genere of movie...I couldn't ever get into the original either..LOL