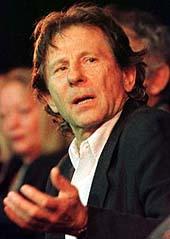 LONDON (Reuters) - Film director SEARCH
Roman Polanski is due to appear in a London libel case via video link from Paris next week, setting a legal precedent and avoiding the risk of extradition to the United States for a child sex offence.

Polanski is being allowed to sue the British publishers of Vanity Fair magazine from a hotel room in after 's highest court in February overturned an earlier ruling that would have forced him to come to to fight his case.

The 71-year-old has been wanted in the after pleading guilty in 1977 to having sex with a 13-year-old girl. He skipped bail and fled the country for before the sentence was pronounced.

Polanski, who won a best director Oscar for "The Pianist" in 2003, has never been back to the or , and if he came to he would face possible extradition to . He cannot be extradited from his native .

Polanski's lawyers say it will be the first time a libel claimant has given evidence at trial via video link.

"The idea, more than 25 years after Polanski left the United States, that he is still unable to return or even enter this country is extraordinary," said Joshua Rozenberg, legal editor at the Daily Telegraph newspaper.

Barring last-minute scheduling changes, the case will open Monday and last about a week.

actress SEARCH
Mia Farrow will be called as a witness, as will Debra Tate, the sister of Polanski's late wife Sharon, who was murdered in 1969.

Polanski is suing Vanity Fair's publishers for a July, 2002, article describing how the director flirted with a Swedish woman in a New York restaurant while on his way to his slain wife's funeral in Los Angeles.

One passage in the report, reproduced in court documents after the February ruling, quotes him promising the "Swedish beauty": "I will make another Sharon Tate of you."

In fact, both sides in the case now accept that Polanski was not at the restaurant en route to Tate's funeral, but was there within three or four weeks of the murder.

Polanski's lawyers deny there was ever any incident like the one described in Vanity Fair.

At the time of the court decision in February, Vanity Fair said in statement: "The ruling does not affect the substance of the case which ... is being vigorously defended by Vanity Fair."

The combination of a high-profile libel trial involving household names like Polanski and Farrow, and the prospect of him suing via video link from another country, mean the courtroom is likely to be packed.

The case has generated debate in about whether Polanski should be allowed to use the country's legal system while avoiding the consequences of its laws.

Polanski, who escaped German forces when he was a boy in and whose mother died in a concentration camp, lives in with his wife, the French actress Emmanuelle Seigner

thanks for these unknown facts...
keep it up....

The only thing strange is that Vanity Faor isn't settling....

Just wanted to point out how easy it is for people to misspell words. Does it make you less intellegent?? No.

I think its bogus that he's allowed to do this via video link. Another big man who wont take responsibility for his actions. Too bad the US didnt twist Englands tail a little to not allow it to happen. Ahhh the life of a fugitive on the run.