The Dreams of the EveryDay Housewife 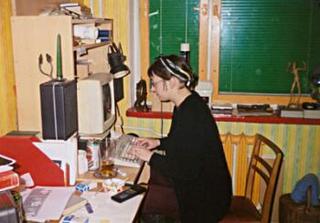 Hopefully we’re done with the kooky ruler of KTS. If you are in KTS you SHOULD for your own sake read this post-- http://groups.yahoo.com/group/KILLEDTHESIXTIES/message/52820 - that the EveryDay Housewife Heaven posted. Go on I’ll wait. And if you are not a member, sign up and answer the 10 lame questions they ask- and they will think you are me and reject you half the time. That amuses me NO END.

The broad is delusional. The only emails she got were from her other personalities. The whole rant is a non-issue- I wasn’t coming back, I am already there. And WHY would I want to be at a place where Denise, who is cool and on Bobby’s mailing list and such, allows this woman to run rampant over everyone?

“When I first joined this group back in May of 2002, it was a very hostile place. No one felt as though they could express a thought or an opinion for fear of being verbally beaten down by Harold/ColScott and all his other ID (and there are many)..”

I thought the group was all grown ups. If they cannot handle verbal sparring they shouldn’t be typing on the internet. If they can’t keep up with their smartest member, they should sit back and watch.

“Case in point, he claimed Danny DeCarlo was dead (which he isn't)”

Actually, Danny died three years ago in . So who is the expert?

“Neesy (a well respected long time member) inquired as to where Harold/ColScott got his information, he began to verbally insult her and attack her religious beliefs. As far as I was concerned, that was the last straw.”

Neesy attacked me and stated that as a Mormon she wouldn’t listen anymore. I pointed out that Mormons slaughtered a wagon train full of men, women and children. It was called the Mountain Meadows Massacre. You can google it. This is attacking her beliefs? It’s not like I pointed out that Joseph Smith was a con man who believed an Angel gave him golden plates that he then translated and lost. What a maroon!

“Is this someone who you'd like to have harass you in private emails, or even worse, harass you by telephone, as he's done to another member of this group?”

This is libelous- I have never spoken to ANYONE by telephone from that group. If my lawyers weren’t busy doing new deals they’d own her small Red state house.

“Anything less is him just trying to be brave and not show that a "housewife" beat him.”

What did she beat me at, class? I’ve NEVER not been on the boards and I now have my own vehicle where ALL of us can post freely. The only thing she did was turn KTS into a Klatch full of bored housewives, asking the same questions (what happened to Charlie’s son) over and over again.

“But if I was bothered, I wouldn't type this post.”

Actually, if you were NOT bothered you wouldn’t type this post- you are scared because you cannot control the truth any longer.

“Trust me, you "newbies" wouldn't even begin to understand what he's put this group and every single other discussion group through. For those of you who don't know, his behavior was so bad, they kicked him off his own discussion board. What's that tell ya?”

Newbies, I urge you- ask this self-appointed dictator to let you understand things for yourself. Ask her to explain that last sentence. I don’t know what she is talking about- kicked off my own discussion board? WTF? Does that make sense to anyone who doesn’t hear voices? DEMAND ANSWERS!

Newbies- Heaven wants discussion without facts, without challenge, without thought and without freedom. I will leave you with a sentence, repeated exactly to show you how much she cares about the truth and about the group.

“Even if the yes's outweighed the no's, I still wouldn't let him back in.”

I rest my case.

“Case in point, he claimed Danny DeCarlo was dead (which he isn't)”
Actually, Danny died three years ago in Canada. So who is the expert?


Prove that statement. Reference anything you like and I'll give you plenty of time.

Now you are learning- that's good. I'm on my way to San Diego but Sunday we can deal.....

You wrote -John Smith was a con man who believed an Angel gave him golden plates
-----------------------------------
The man who discovered the Golden Plates was named Joseph Smith not John Smith. What does the Mountain Meadows Massacre have to do with the Tate/ LaBianca murders? Furthermore one could safely assume that every religion has had it's fair share of murderers and perhaps even con men. The Catholic Inquisiton killed thousands. The very Protestant Puritans had the Salem Witch Trials, an offshoot of the Hindus spawned the Thugee religion in India which killed hundreds in the name of the goddess Kali. Of course the Islamic faith is full of self-proclaimed martyrs who blow themselves up to advance their cause. Every one of these examples shows that religion can be perverted to suit an individuals aims and needs. Every named example has killed the innocent, and in most instances women and children were equally persecuted.

Angie- thanks for the catch- I fixed it.

Everything else you say is true. I never said it wasn't What did being Mormon have to do with T/L? She brought it up or else I wouldn't even know!

I fully agree with the last statement. You've been told that you CAN post on KTS as long as you keep the abuse and namecalling muted.
Because you lack the tact and integrity to be able to do that, because thats what makes you "you", is your problem not KTS's or their moderators.

I urge you to answer my first question before you go off on a rant about grammar or english or anything else.

I'm new here and don't want to make waves but there you are mistaken about Danny DeCarlo.

Quoted: “Case in point, he claimed Danny DeCarlo was dead (which he isn't)”
"Actually, Danny died three years ago in Canada. So who is the expert?"

As of 2014, Danny DeCarlo was still alive and kicking, living in Medford, Oregon.