Most Excellent Witness! Party on Paul.... 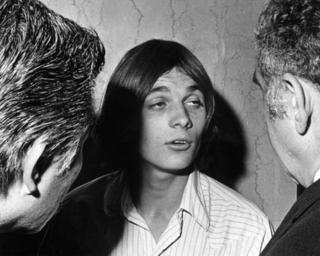 Yeah, listen, I really think the Family was a bad thing. Bad Bad Bad. That's why I tried to follow that other dude out in Death Valley, Crockett. I mean, sure, I followed Charlie blindly. But then I testifed that he was bad, remember. Yes I tried to go back to the Ranch and take Charlie's spot. But that was just to bang the girls, ya dig? I mean, well, yeah and take over. I mean I helped get Charlie out of the way, somebody needed to lead. Death turned Charlie on man and all those people, they became Charlie. Then they tried to kill me and I almost died. They thought I was a snitch just because I snitched on them, can you believe that shit? Then the whole scene ended and I became the mayor of a town Population 80. Then I played some music with someone from the group. Then I got married. Then I went on Larry King Live, just not with him and said that drugs were bad and the Family was bad. Now I am dead, and let me tell you, I am up here doing some weed with Sharon, Gibby, and Jay and the Family still sucks because they are stuck in prison or wandering the earth while me, I'm dead man and that turns Charlie on!
Posted by ColScott at 2:21 PM