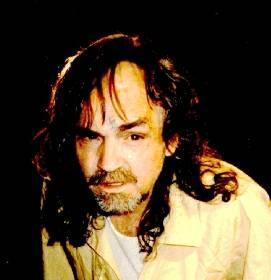 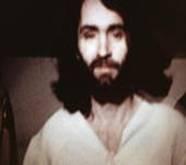 People have been writing in to ask me what I meant in an earlier post about there being many Charlies. It's because people don't stop to think about things that something as obvious as this needs to be explained.

The Charlie who takes part in all the stories we have heard is the first Charlie. He's a sometimes good looking, always working the con, hustler, preacher, lover, what have you in his early 30s. He has between 1 and 20 girls at various times who worship him as a savior. He has between 1 and ten boys and men at various times who do the same. He is on his way to a rock career. He just got out of jail and talks a great game. Celebrities listen to his patter and some take him under their wing. He is the Charlie of legend.

Things change during the trial. You can see photos and footage early on of the above Charlie. He's ready to play. He now has worldwide attention and he loves it a lot.

Our basic theory here at the Official T/L Blog is that the BUG, while in the process of getting Charlie for crimes he may not have committed , decided to make Charlie into a Dragon of legend. St George (Bug) then would slay that Dragon (Charlie). But please note- HE COULD NOT HAVE DONE THAT WITHOUT CHARLIE'S COOPERATION. We believe that Charlie is a typical Hollywood animal, a narcissist, an attention whore, who was MORE than ready to be that Dragon. Think about it. Charlie always wanted to be famous. And now he is more famous than almost every other real celebrity of his day.

That is where the second Charlie comes in. He acts crazy and wild because that shows he is a dragon and that gets the attention. And somewhere in there he loses his way and the act becomes reality.

People change. The David Lynch who made a coherent film like THE ELEPHANT MAN does not exist anymore. The Charlie who rants in interviews is a crazy, lunatic, disturbed old man.

But if you believe that he was always thus...then you have played into the game the BUG always wanted you to play.

With Charlie's assistance, of course.
Posted by ColScott at 7:18 AM

while i certainly have ZERO love for charlie - and i'm a huge buff - even saw the recent MANSON dvd (reviewed on my site) which is pretty insane - however, while i basically believe charles to be a killer and a guy who ordrs killings, (he took out that dude's ear and some other shit they never proved - but widely believed to be true) - he is definitely not the same guy he was - he's a senile old crazy who plays repetitive word games with himself and talks in impossible circular arguments. It's a shame he can't finally see himnself for what he is and do an honest interview - but i'm sure what we see is about as ol' charlie is ever gonna get. by the way - are you aware that a movie called CHARLIE came THISCLOSE to getting made, produced by don murphy and starring Vince Gallo as Charlie to be dist. by Lion's Gate? The film was goign to be a bit more sympathetic to charlie's plight - not to redeem him, but to show the disallusioned dreamer side of him that lead to the ego - maniacal bs that took over his life. But financing fell through very late into the game - that would've been a good one. If u don't knwo about it - i might be able to get my hands on a script. MW

I read it it was on the web for a while. It was very solid stuff. I believe the writers are working with Bobby Beausoleil on a new version.

They have plenty of time to do Bobby's story Since Transformers were put on hold HUH. LOL

colscott ought to know he's don murphy
http://www.lukeford.net/profiles/profiles/don_murphy.htm
check out the name calling and insults at the bottom of the page. who does it remind you of?
this part is my favorite
Murphy got into a celebrated bar fight with director Quentin Tarantino in October of 1997 at Ago on Melrose.
don sued tarantino for 5 million but all he got was $250.00 for his broken wristwatch.
http://www.eonline.com/News/Items/0,1,2090,00.html
After the sparring match, Tarantino sounded almost pleased by his performance.
"I really think I slapped some respect into the guy," the 34-year-old Oscar-winning writer told Daily Variety.

how i'd love to shake tarantinos hand

Oh thank you now I get it- you think I am a film producer. While I wish I had that kind of money, I am not. But thanks for clarifying, losers.

Amazingly enough, shelby, the link you sent..has been removed..LOL..Hmmm..me thinks someone is trying to hide something.

my fault i didn't post the entire address. try it now
http://www.lukeford.net/profiles/profiles/don_murphy.htm

ok not my fault it's this stupid blogger. after don_murphy it's .htm
so don_murphy.htm

Jenn- there's nothing to hide- if I was that guy why would I care if you knew.

That was the MOST fun EintDave and I ever had!

lol still fighting about the col being who ever.