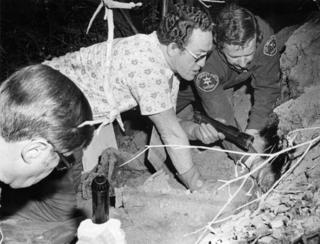 Thankfully, Heaven at KTS never runs out of inane and inaccurate statements so I don't have to struggle with my daily posts.

For the last few days she has been repeating that Bruce Davis, the new born Christian who wants his freedom, told Clem Grogan in prison that he needed to reveal where they buried Shorty in order to get out.

While you would think a Christian would suggest such a thing because, hmmm I don't know, it was the Christian thing to do, the problem is it didn't happen. Bruce didn't want Shorty found- he always had the chance to claim that Shorty was still alive if he needed to. I know you don't have first hand knowledge like I do, but think about the sheer stupidity of the comment for a moment... the cops wanted to find Shorty to be 100% sure he was dead...whoever revealed the location would get special consideration...and Bruce is gonna tell Clem to do it instead of doing it himself? Doesn't even pass the housewife logic test does it?

What actually happened was that Bobby and Clem were in the same prison, they were friends, Bobby liked the big goofy Clem, the pair worked on a lot of music together in the prison, Bobby being a very accomplished musician and Clem having a strong voice (it is his voice on most of THE FAMILY JAM cd) and Clem complained to Bobby after a parole hearing that the myth was working against him, they would never let him out because they thought he chopped Shorty up, and BOBBY encouraged him to cut a deal to reveal Shorty's remains (see photo).

Thus, through the services of the same bozos like Bug and Kay who prosecuted him, the most mentally unbalanced of the Manson Family Killers now walks among us. Lovely.
Posted by ColScott at 11:32 PM

Interesting to note, since you seem so adverse to the idea that Grogan was released, that he's been out and walking among us for THIRTY ONE years now and hasn't been in a lick of trouble.