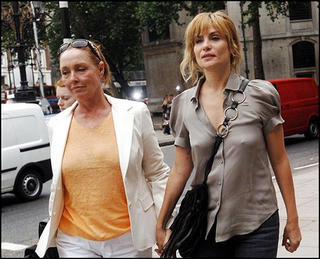 The truth does matter no matter what the KTS Haters would have you believe...
And the courts do sometimes get it right...

Today's Telegraph and other papers---

The former model at the centre of the Roman Polanski libel trial said yesterday that the film director had not talked to her, let alone put his hand on her thigh.

Beatte Telle had declined to give evidence at the High Court hearing over an allegation that Polanski had tried to seduce her shortly after the murder of his wife, Sharon Stone, in 1969. Her statement appears to confirm the Oscar-winning director's claim that a Vanity Fair report about him was untrue.

He called it "an abominable lie" that "dishonours my memory of Sharon".

A jury, without hearing from Miss Telle, was unanimous in awarding Polanski £50,000 in damages against Conde Nast, the magazine's publishers, which is said to face costs of up to £1.5 million. Miss Telle, now 59, said that Vanity Fair's lawyers had repeatedly attempted to contact her to ask her to testify in the case, but she had ignored them.

Once a top model at New York's Ford agency, the Norwegian now lives in reduced circumstances in a one-bedroomed flat in Oslo, with her ailing mother.

However, she appeared to have a vivid memory of the evening Polanski came to her table at Elaine's, the Manhattan nightclub, in August 1969, after his wife was killed by cult followers of Charles Manson.

The jury heard from Lewis Lapham, then a rising young journalist on New York's literary scene, that the director had allegedly tried to proposition her, putting his hand inside her thigh and promising, "I will make another Sharon Tate out of you".

The model said that Mr Polanski did come across to the table where she was eating a steak "and it was if he tried to say something but he didn't".

She said: "I was very young and wore my hair very long. I looked like a beatnik I suppose.

"He never spoke to me at all."

She said: "Polanski just stood there. He just stared at me for ages. Perhaps I reminded him of Sharon Tate."

Miss Telle said that she was with her then lover, Ed Perlberg, and had no idea who Polanski was until he told her in the taxi home later that evening.

She told the Mail on Sunday that lawyers for Conde Naste "wrote to me several times, but I ignored them".

She added: "At one point I said I was coming to London and I would see them but I didn't. I just wanted to put them off. Ed wrote to me too. He wrote all about that night, saying, 'Do you remember how Polanski came on to you? How he said this and that'.

"I just thought, 'If you remember so much about it than you talk about it in court. It isn't how I remembered it'."

The model said that she was pleased for Polanski. "I'm smiling. He didn't touch me, he just didn't. I'm so happy."

She insisted that her modelling days were not over.

"I know I need a little work done, a nip and tuck here and lose a few pounds. But I'll do that and get back working again."

Miss Telle added: "I was considered a beauty, you know. But Polanski was never fresh with me.

"I never spoke to him that night and I never saw him again."