Bruce Davis Wants To Move Next Door To You 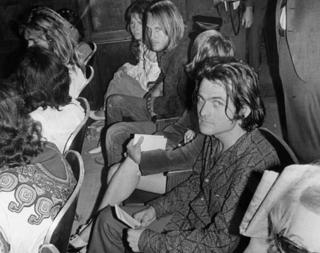 The KTS Housewives seem to be having a heated discussion about whether Bruce Davis deserves parole more than the next Manson Family killer. Heaven isn't worried because she feels that only Charlie would kill again, because it came so easy to him, even though he never killed ANYONE. Interesting. She also misquotes me as saying Bobby "only" killed a drug dealer- this belittles my point by turning it in on itself. I constantly say that Bobby has served more jail time for killing a drug dealer than anyone in American history. This is an accurate statement.

As far as Bruce is concerned---

1- Their hero the BUG believed Davis was in the UK when Joel Pugh mysteriously committed suicide, perhaps with the help of Bruce.

2- Bruce was not only present at Zero's unlikely game of Russian Roulette, he cleaned the gun afterwards like a nice coverer upper.

3- As one housewife correctly states, he was suspected in the death of Marina Habe.

4- He was convicted in the killing of Gary Hinman.

5- He was convicted in he killing of Shorty Shea.

6- The BUG links Davis to the savage killings of Doreen Gaul and James Sharp.

Should he actually be guilty of these many crimes, then Mr. Davis got off scott free for them.

But hey, KTS is okay if he's released just as long as mean old Charlie stays locked up.
Posted by ColScott at 8:47 AM

Heaven isn't worried because she feels that only Charlie would kill again, because it came so easy to him, even though he never killed ANYONE.

He was convicted of killing Sharon Gibby Voytek Jay Leno Rosemary Hinman Shorty and I think Howdy Doody too.

He didn't kill ANY of them.

Can you prove YOU didn't kill them?

heaven is entitled to her opinions just like you

This is an ongoing debate among the less educated in the United States. Where does this entitlement come from? It is NOT a constitutional right, so who says she is?

let me ask you this, if heaven is just some uneducated stupid housewife then why do you care so much what she says? wouldn't you be big enough to just overlook it and go on about your own business? if kts is just stupid housewives why do you want to be in there so badly? if people want to educate themselves about these crimes no one is stopping them. everyone is free to seek their own knowledge so they really don't need you constantly worrying about heaven. just my two cents and my curosity. it just seems very strange that you say you're so educated but you're so worried about heaven. it's very odd.

if you didn't believe in expressing your opinion then why did you create this blog? like you once said to me here, if you don't like what is being said here don't read it. one could say the same applies to you. if heavens opinion bothers you, don't read it. it's called freedom of speech. heaven has every right to say what she likes, just like you do. if it offends you why are you still reading it? just curious

i can prove i didn't kill them, i wasn't born yet hehehe
but i believe the question asked of you was can YOU prove he didn't kill ANYONE? i know he didn't kill the 7 tate-labiance victims. but that is not to say that he has never killed anyone. i believe he did kill shorty. he may say he didn't but think about how many convicted murderers there are that say they didn't do it.

1- NOBODY ever said Charlie killed Shorty. Clem always said he did.

2- Heaven is just a place on earth.

3- I never said you couldn't say anything you wanted. I said where does it say you have a right to an opinion? You didn't answer.

we're even then because you never stated your proof for danny decarlo being dead.

Danny Died in 2001 in Canada according to Canadian prison authorities.

That is my proof.

Hey Shelbes why does Heaven keep saying BRUCE told Clem to give up the Shorty Body?

Clem was in the same prison as Bobby and BOBBY told him.

Is that a problem?

not that i'm aware of. i told you once before to email her. i think you two should work it out.