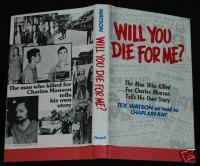 Did you ever read Tex's book? It has one absolutely amazing scene in it that gave me the full on creeps when I first read it. It's the scene where, still full of narcissism and self-importance, he yells at his good Texas mother (is there such a thing) to shut up, he did kill seven people that he didn't know for absolutely no reason at all. Shocking in ways that it wasn't meant to be.

Does it bother you that this guy tries to get out every couple of years by claiming that he found Jesus (was he lost?) and that Charlie MADE him kill those people? I mean seriously, wtf? I want to know WHY Tex did it. Drug burn? Power trip? If we accept that the BUG theory of Helter Skelter is nonsense, then why did a good old boy from Texas become one of the worst killers in US history?
Posted by ColScott at 1:14 AM