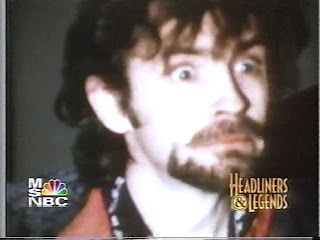 Manson, 72, did not attend or send a representative to the proceeding before the Board of Parole Hearings at Corcoran State Prison.

He previously told a prison counselor that he refuses to participate because he considers himself a "prisoner of the political system," said Patrick Sequeira, Los Angeles County deputy district attorney, who attended the hearing.

The board voted to deny Manson parole for at least five years, the maximum allowed by law. He will not be eligible for release again until 2012.

Despite his age, Manson "continues to pose an unreasonable danger to others and may still bring harm to anyone he would come in contact with," the board wrote in its denial.

Manson has had 12 disciplinary violations since his last parole hearing in 2002. He refused to take advantage of rehabilitation programs, and he would not participate in a psychiatric evaluation, Sequeira said.

"He refused to cooperate, so the conclusion they drew from the reports is he still remains a danger to the public," Sequeira said in a telephone interview. "He was convicted of nine horrible murders. He has expressed no remorse or empathy for any of the victims."

Manson initially was sentenced to death for the August 1969 fatal stabbings of five people in the Los Angeles home of actress Sharon Tate and the murders the next day of Leno and Rosemary LaBianca. Prosecutors said Manson and his followers were trying to incite a race war that he believed was prophesied in the Beatles song "Helter Skelter."

He also was convicted of the earlier murder of musician Gary Hinman and the slaying of former stuntman Donald "Shorty" Shea at the Spahn movie ranch in Chatsworth, where Manson had his commune.

His death sentence was changed in 1977 to life in prison with the possibility of parole, the result of a 1972 ruling by the California Supreme Court that found the state's death penalty law at the time unconstitutional.

Hmmmmm. Did that nonexistent movie "The Devil Exists" have anything to do with it?

Go to the right hand side of the front page and click the title of the post, like "Stop the Presses". It will show you there, I believe. It shows who did it, but not the posting.