August 6- Party Or No Party 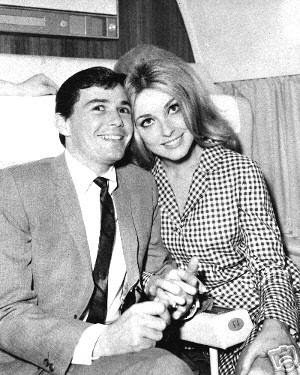 First off thanks to WestsideWalks for the Picture location.

We can use today to discuss two things.

Sharon is back at the dream house, fully ready to pop out Baby Paul. It is so freaking hot she spends most of the time in her underwear. Oh, and besides her friend Abigail's BF Voytek being around, Sharon's ex BF, the guy who never stopped loving her, Jay Sebring is hanging about. If you look at the famous roll of photos that AesNihil sells, which Bill Nelson stole from the cop who stole them from the Tate house (phew!), little Jay is hanging around in tight speedos. Now I know this was the sixties and people are liberated and shit, but really. Her EX BOYFRIEND is hanging around the house while her husband is in Europe. Fact is, Polanski is a cinema genius. One for the ages. He was also at that time (he appears to have gotten better) a shithead husband. I believe Roman was out, within weeks of becoming a dad. I don't know if Jay had a shot, but he wanted one that is obvious. Do I think they were up to shit? No. But it was only a matter of time. Time that, in three days, they would never get.

Let's also discuss the "parties" that were going on up there. I have personally met over FIVE people who really believe they were invited to a party up at Cielo the night of the slaughter. This is simple. NO they weren't. Anyone who tells you they were (including George Lazenby) are lying and have been lying for decades. Just nod your head and ignore them.

Charlie returned from Big Sur to Spahn with Stephanie. Charlie finds out that Bobby is staying at the Ranch with most of Hinman's property still on him....so he tells him to get out.

Also sometime early today Bobby Beausoleil, sleeping in the Fiat that belonged to Gary, is arrested for murder. He's still in jail for that 38 years later. But it is his arrest that clearly drives the next three days of madness.
Posted by ColScott at 9:22 AM

You are welcome.(tis my email addy)

Question, there was unidentified fingerprint left on the bottle of beer that Jay had been drinking.

Does unidentified mean "unknown" or "unreadable"? Or perhaps both. The terminology on that one has me wondering.

I believe it is in the Sanders, that Uncle Ed implies that there were a few "unidentified" fingerprints with the implication there that they were readable prints but not accounted for even into the trial.

I am just wondering if this assumption was correct.

Also, the question on Jay and Sharon I feel is a fine one. They seemed to really care for one another. I don't know if I could stand seeing someone I loved like that with someone else and pal around with them if I thought I had no chance. Knowing that the "new" was doing my old wrong..

Okay according to newspaper accounts-and not the Uncle Ed-an Officer Dolan testified that 22 prints matched the victims, 3 were not good enough for a match, and that there were 25 that could not be matched with known persons. So, I stand corrected.

Also, at what point did Manson tell Bobby to hit the road? And how much did Mark Arneson hang around the Ranch?

From what I understand, unidentified means that they have no one to match the print to.

It's probably a clear, readable print, just no one on file that matches it...

These are great entries Col, thanks!

Never heard the one on Lazenby. (Bond James Bond)..

Jerzy Kosinski told me he was invited that night....

Good questions, Col! The BB arrest truly drove the next few days. Too bad the world thinks it was because of the Book of Revelation and the four Lads from Liverpool.

Shoddy police work and prosecution. The good people of LA should ask for a refund on their taxes!

Okay, undertand the don't believe it thing now, because Jerzy also said that due to a car accident in Poland, Voy couldn't drink, smoke, he didn't take his prescription pills and most certainly could not have taken LSD or anything due to his ill health.(so anything he says is suspect)

Pristash said...
>>>The BB arrest truly drove the next few days. Too bad the world thinks it was because of the Book of Revelation and the four Lads from Liverpool.

well, it really wasn't ALL a 100% lie. Make no mistake about it, apocalyptic prophesies, beliefs, and discussions DID play a part in how things went down. Helter Skelter wasn't all a lie made up by the state. It was one factor in a sea of factors that all seemed to cave in on these people at once, with BB's arrest a definite catalyst.

You are so right indeed...Skelter was in the mix, but anyone who thinks it was the main thing probably also believes Oswald acted alone....

Cool someone thought I looked like Heaven...at least for a second or two...she's a beautiful woman and me, well, I'm a guy so I'll leave it at that....she might not be so amused.

"Skelter was in the mix, but anyone who thinks it was the main thing probably also believes Oswald acted alone...."


Well, people do.
Besides, the prosecution stated at trial that they believed there to be more than one motive. Don't take my word for it though, just read the transcripts.