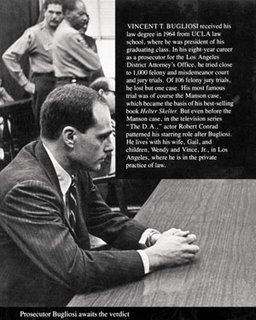 On 6-25-73 at 1900 hours, Officer Rahm was detailed to 2220 Ocean Park Blvd. #A regarding an assault and battery. Upon arrival, contacted the victim, Virginia Cardwell who related the following.

She stated that at approximately 1600 on this date, she was in the bedroom of her apartment when her boyfriend, Vincent T. Bugliosi, (The former Assistant District Attorney of Los Angeles County) entered her apartment through the rear door. He came into her bedroom and began to beat her. She stated that he threw her onto the bed, jumped on top of her and began pulling her hair and choking her. He then struck her in the face several times with his fists, then threw her to the floor and pulling her off the floor by her hair. He then grabbed her throat and choked her approximately three more times.

Officer Rahm asked Cardwell what led up to this incident. She then gave the following statement. She stated that she first met Vincent Bugliosi on 4-24- through a friend Julia Antonelli in her apartment at 2216 Ocean Park #B. He then accompanied her to their apartment and they talked for a few moments, when he began to kiss her. He then physically pulled her into her own bedroom and continued to kiss her stating that he wanted to make love to her. She refused, and they both went back to the apartment at 2216 #B Ocean Park. She then left a few moments later and Cardwell returned to her apartment approximately two hours later to discover him waiting in her bedroom. She stated he again made advances and was very aggressive and that she submitted and they had sexual relations.

Since that incident, Cardwell states she has seen Bugliosi approximately 11 times and has had sexual relations with him on numerous occasions.

Approximately 1 ½ weeks ago, she told him that she believed she was pregnant. Upon hearing this, Bugliosi became very angry and threatened to kill her if she had the baby. He then gave her $448.00 in cash for an abortion. Cardwell told him that she did not believe in abortions and be again became very angry and threatened to kill her. She was in fear for her safety, so she told Bugliosi on Friday, June 22, that she did have an abortion. She stated that she have him the name of a doctor which she picked out of the phone book.

When he came to her apartment this afternoon and began beating her, she stated that he accused her of being a liar and told her that he checked with the doctor’s office and with the hospital and had learned that she had not been treated there. Cardwell could not remember the name of the doctor that she gave to Bugliosi.

While beating her, he stated such things as “I’ll break every bone in your body – this will ruin my career.” He also demanded that she tell him the truth as to whether she had had an abortion, stating that she would not leave the apartment alive if she lied to him. She described him as being extremely angry and upset.

After remaining in the apartment for a few minutes, he then left. Cardwell was insistent that a police report be filed, stating that she wished to press charges for the assault and battery because she fears he will attempt to harm her again. She also gave a description of his vehicle a 1973 Buick silver/black with possible California license 327 HEY.

The only visible injury to Cardwell was a bruise over the left corner of the left eye and she was advised to go to the Santa Monica Police Station where an I.D. Tech could take a color photo of the injury.

Where was his wife in all of this and did the charges stick? Was the case dropped or is that another chapter?

Wow, it takes a real man to beat up a pregnant woman. *HIS* Career might be ruined if anyone found out. It's all about him. What a dick...
:(
cb

The PIG that Bug was!!!!!!!
The the pot calling the kettle black.

Sounds too bizarre! Doesn't sound like the Bug at all! Not disputing it, just sounds so out of character!

Col: You scanned the articles. Why not the police report?

Joe
I didn't scan the articles I downloaded them off the LA Times.

But you can see this right here....

Ya know, unless it went before a judge and was proven, it IS possible the girl was lying...

I won't condemn a man until we have the whole story.... All we're reading right now is the police report...

I'm hoping the next istallment will tell us the outcome of the charges...

Ya know Cat, I feel the same about the marks left on this girl. To me, there should be more for the beating she took.

Cats I kinda have to agree with you. Based on her description of what happened, she would have a lot more physical bruises than just something near her eye.

And plus, he appears in her bedroom (from the description it sounds scary and threatening) but she has sex with him 11 times after that on subsequent occasions? How skeered could she have been?

I don't doubt that the Bug could most likely be a bully with words (he's a master with them we all know) but the beatings sound fishy.

Why'd he pay the settlement if it didn't happen?

according to what I have

- child is miscarried
- Cardwell agrees to drop charges
- Bug tries to retro-fit story but inventing relationship with false receipt made up by his secretary who just happens to be tagging along
- Bug agrees to settlement which has a gag clause in it....

Shores -- You still out there?

Hi there,I enjoy reading through your article post, I wanted to write a little comment to support you and wish you a good continuationAll the best for all your blogging efforts.