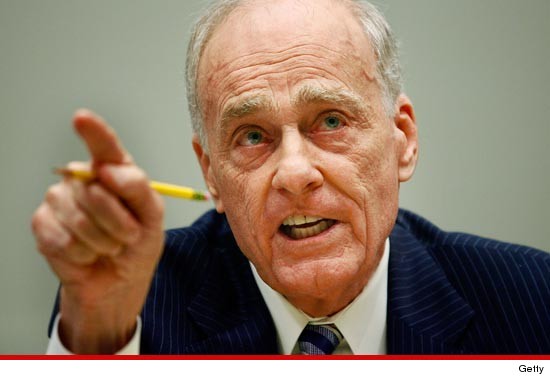 The man who put Charles Manson in prison is currently hospitalized in California, following complications from cancer surgery ... TMZ has learned.

According to his wife, the surgery appeared to be successful at first, but Vincent experienced complications shortly after, and was admitted to the ICU. Vincent's wife wouldn't specify the nature of the complications.

Vincent's wife adds, "He has been in very bad shape for some time. He regained consciousness this week, finally starting to be on the road to recovery. He's going to be in rehab for a long time."

Vincent left the ICU last week but is still hospitalized.

Thanks to Vincent's badassness back in the day -- Charles Manson was convicted of seven murders in 1971 and sentenced to death. Manson's death sentence was reduced to life in prison a year later when California abolished the death penalty.

77-year-old Manson's latest request for release was denied in April -- and since he's not up for parole again for another 15 years, chances are he'll die behind bars.
Posted by ColScott at 12:52 PM

manson's primary goal is to see Bugliosi into his grave, maybe it's beginning to happen.

Seems Manson is in much better shape then his nemesis.

The inference is that a Mailman is a code word for slow witted white trash.....And that a Mistress is always a whore.

Both points are debatable.

Manson's primary goal is to see Bugliosi in his grave?

Where and how did you learn what Manson's primary goal is?

So why would you make such a statement?

Does Tom G not know about the mailman and the mistress?

If so, how are both "points" debatable?

Other than my baseball team is 12 games out of first place.

it's well known manson really enjoys it when the people who put him in prison die, such as when older died.

It's well known?
Really?
In what circles is it well known?
What evidence can you bring to the table to back your fictitious and irresponsible words?
You can't because you are just making things up to sound cool and funny.
Try being original. You might even succeed in being cool and/or funny...

actually i have heard manson himself say it in interviews. you are making a way too big of deal about this, get a life.

You HEARD Manson say it in an interview?
Which interview?
In your previous post you mentioned a similar reaction he had when Older died.
You've already tangled yourself up here in your fabrications while having no way to untangle yourself except telling me to get a life - so I reckon you've proven my point for me.
I do have a life which is why I don't go around posting nonsense for the easily entertained non-thinkers like yourself.

well i'll tell you what, i'll go through my thousand hours of manson family interviews and get you some specific references, ok. you're obviously a manson fan and anything someone says that's shows your god in a negative light pisses you off, so i'm not going to respond to your comments any longer except of course to let you know where those quotes came from.

It would be a lot easier if you'd just admit that you got caught posting bullshit because someone called you on it.

Instead of addressing the issue, your black and white thought process leads you to assume I'm a Manson fan. I'm not a fan of anyone. I'm a fan of truth. That's what this blog is about - getting to the truth. But parrots like you come here and clog the entire process because you offer NO original thoughts or insight. Just the same repetitive rhetoric.

Furthermore, you've managed to entangle yourself AGAIN by falsely stating that you'll go through your thousand hours of Manson family interviews. Why would you have to analyze "family" interviews? Your original claim was that Manson's primary goal was to see bug in his grave. Then, after being challenged about that, you claimed it was well known that Manson enjoys hearing about people who put him in prison dying. And that there's video evidence of back this up.

The truth is that there are nowhere near a thousand hours of Manson interviews. You'd be lucky to get anywhere near 50 hours at best. More proof that you are making things up.

You simply don't want to admit that you are caught. You're backed into a corner. The only way out is to paint a swastika on your forehead, pretend to be Manson, and video yourself making the claims.

Yep, I don't expect any reply from you because you don't have one - and you'll never be able to produce the references you carelessly speak of.

Scramble
Why engage the beasts? Guy opened his mouth and hot air came out. It happens. Ignore the white noise.

It's the same hot air that has swept the nation - it's a plague.

Why engage the beasts? Boredom and intermittent rage.

It's all in the quest for truth. Just squeezing in a valid point.

Besides, I only do this like once a year. My way of dropping by and saying hi!

Its is not a hard thought process to beleive Manson's goal is to outlive the bug. Even a novice to the case would come up to that conclusion.
But some of you have a need to bash any new idea or person that doesnt fit into your nice neat apperance of what you think happened. Do you not understand that if the truth ever does come completly out that it can come from someone making a offhand remark, or evidence found somewhere no one would have thought to look?
Are you sure you want the truth? Can you handle the truth?
Then do not turn your nose up at anything just because you didnt hear it before or because it sounds outlandish. All ideas should be welcomed and investigated. If you knew everything, then there would be no purpose for this blog and nothing for you to do.
Dont make me get out the belt!

Col Scott is nothing but an obsessed psycho
Debra Tate has rejected his morbid curiousity and he ended up bashing her for it.
He can only hide behind a poorly done blog

Col Scott is nothing but an obsessed psycho
Debra Tate has rejected his morbid curiousity and he ended up bashing her for it.
He can only hide behind a poorly done blog