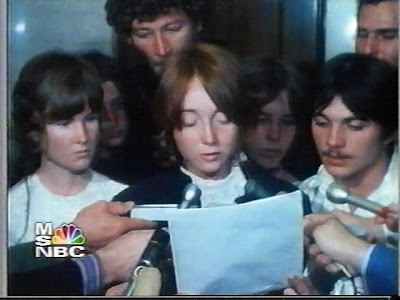 We only call him Bright because that is his name. We continue our analysis of his script MANSON GIRLS. Please note that there is so much historical inaccuracy it is sickening. And bad writing. I hope any financier realizes that what buried THE HURRICANE movie was the inaccuracies. I don't think Sadie was at Esalen being fucked by Charlie. The girls were arrested using a credit card from Mary Vitasek not Gary Hinman. Charlie never had a copycat motive idea. How many errors and stupidity can you find? -----------


ON FAVORING TABLE – showing Charlie giving a massage to Sadie.

ON HIPPIES – looking ever so peaceful, when Sadie is HEARD.

SADIE – as Charlie climbs on her like an animal and starts fucking her in full view of the PATRONS.

ON CHARLIE – as Sadie enthusiastically flips over to receive Charlie missionary style.

Esalen had a well deserved reputation for being

a real “do your own thing” kind of place, but I

guess Charlie took it a little too far and the

management ended up throwing them both out…

Charlie and Sadie are shoved out the door by a bunch of HIPPIES.

you! You think you’re better than me! You better

watch your backs, motherfuckers! ‘Somebody

hearts out, you hear?!

COPS walk in to look at ’s body which is now covered in flies and looking really, really disgusting.

And then while Charlie and Sadie were off

body and immediately put out an APB for his

Bobby Beausoleil is on his belly, crying in the dirt next to ’s green FIAT as the COPS cuff his hands behind his back.

And a couple of days later, wouldn’t you know

it? Bobby got pulled over just outside

in ’s Fiat… It was the last day of freedom

Mary Brunner and Sandra Goode are standing outside the entrance to Sears with their hands up against the wall as TWO POLICE OFFICERS handcuff them.

And then the following day, Mary and Sandra

got pinched with a bunch of stolen credit cards...

Brenda, Sadie, Squeaky and Clem are fooling around under a pile of sleeping bags, when Charlie enters.

No, what about him?

Oh, fuck… Charlie… This is bad… Bobby got

pulled over in ’s Fiat and now they’re

holding him on a fucking murder charge in

What a dumb shit!
BRENDA

Then this morning Mary and Sandra got caught

with a whole sack full of credit cards!

That ain’t so bad… But Bobby… That’s bad…

But check it out, man… The cops were too stupid

to put any of it together.

What, you think they’re not going to figure it

No bail for Bobby… And right now the girl’s

bail is six hundred... But there won’t be any bail

when they realize they’ve got ’s Visa card...

got no money.. You put everything we had into

And that was when Helter Skelter turned from

else... See, Charlie figured if the cops were called

to another crime scene that was enough like where

they found ’s body, then they’d have to let

And if he kicked off a race war that toppled the

was doing it, then so much the better.

Looking into my chrystal ball, I predict that everyone is going to be saying "Who's your Daddy!?" by the end of the month!!! OMG, my stomach hurts. I haven't laughed this hard since Flarp (tm) !!!

Hmmmm, where's the Hostess Twinkie truck? Doesn't his speeding ticket discredit that he could have been at Esalen at all just before the murders? Perhaps the filmmakers are substituting Sadie for Schram so us audiences with our nortoriously short attention spans don't get too.........confused?

And did BB know that the murder weapon was hidden in the wheel well of Gary's car?

Hi, everybody, Groove on this if you choose:

Just today, the body of an Ithaca College student from Minnesota found in a pond...too early to say whether or not there is a link.

Speaking as someone who has struggled for many years to find work as a writer I have to express amazement at the quality of this script. It is absolutely, unrelentingly dire. It beggars belief. It plays so hard and fast with reality that the mind reels. The dialogue is so stilted, so tortuous, torturous even – that I have to conclude the writer can never have heard normal people speak. I’m no lawyer, but surely this is libelous in the extreme. The worst thing of all is that it will probably get made, avec or sans Ms Lohan.

Now Polanski, there’s a guy who made good movies (well, most of them, we might ignore Pirates). The only Don Murphy movie I saw through was Natural Born Killers (he was one of the producers). Not a bad movie. I did start to watch The League of Extraordinary Gentlemen, but gave up after half an hour or so – not for me. And I’m too old for Transformers, but I guess Kids like it.

But this movie looks like it was written by a semi-literate eleven year old, with vague half-memories of something he had once read, and who filled in the gaps in his knowledge with pure Fantasie. Some of you find this hilarious - I'm afraid in me it induces despair.

Ohhhh K...I will now make another attempt to read the entire excerpt...

(ON FAVORING TABLE – showing Charlie giving a massage to Sadie.)

(ON HIPPIES – looking ever so peaceful, when Sadie is HEARD.)

(ANGLE ON SADIE – as Charlie climbs on her like an animal and starts fucking her in full view of the PATRONS.)

CHARLIE - Who’s your daddy? Tell me who your daddy is?

Ohhh K, I failed again but, HAHAHAHAHAHHAHA...I did get another good laugh for the day !

Thanks for that link..that is scary stuff, man.

And even more intresting, as you seem to be alluding to in your post, is the "smiley face" the killer(s) are using has an "x" on the forehead.

Re: The killers -- "Sinsinewa" is an Odawa / Chippewa Mative American word for "herb woman". That's likely why it's found in MI and MN. And before you guys think anything untoward... I've never, ever been anywhere near Minnesota. Maybe we-uns should rethink our signature
x:-) Or maybe we're just so cool, the killers borrowed it from us.

Re: The script -- my loved ones and I have been gleefully rewriting it.

"Why aren't you 'hoes out on the street raising some bail money?"

"Sorry, Charlie, but we DID steal for you lots of Twinkies!"

"WOOOORD UP, Charlie", says the other Manson girl in agreement.

Im not laughing anymore, this is just crap-i mean can they at least get the sequence of events in the right order-is that asking too much.
Maybe i have missed the point and it is in fact a comedy.
Crikey any person on this site could write a better script than that.

It would be interesting to count the number of historical movies made in Holywood (sic!) that are without significant factual error. There are numerous counter examples.

This does seem like a total stinker tho. BUT WHAT AMERICA REALLY WANTS TO KNOW IS: WHO WILL PLAY THE CORN FED HOMECOMING PRINCESS TURNED POLITICAL PRISONER?! WHAT WOMAN AMONG THE BOTOXED & SILICONE INJECTED WANNABEES HAS THE ACTING CHOPS TO REFLECT THE BRAINS, THE NATURAL UNTOUCHED BEAUTY, THE INNOCENCE, THE DEPTH AND THE SINCERITY OF THE UNFAIRLY IMPRISONED LVH (freedom be upon her) ????

And a question? Where did LVH display her crotch for all to see? I missed that ...

Hell-e-wood movie without too much error: Erin Brockovich.

LVH: The little girl that was Hermione in Harry Potter.

But who is gonna play Charles? We've been suggesting Tom Cruise, Johnny Depp, and the dude who was the computer geek in the last "Die Hard" (same bone structure) but of course, nobody is listening to us.

Didn't all this thread start because the film was going to be made without CM? On this blog back in, was it February?

But if we are going to have Charlie in the movie, how about CA's own Arnie, with a Hummer instead of a dune buggie.

Now that would be seriously funny ...

OK, lets use EB for an example. They collapse two main characters (two high powered lawyers) into one person. And they add a "biker" love interest (in reality, she was having an affair with the head of her law firm).
And thats just for starters, yet this movie was presented as a "true story" and won an Oscar! If a person really wanted to be merciless, they could make EB look as bad (from a factual point of view) as MANSON GIRLS.

I don't want mean to single out EB. I think Hollywood simply can't make a factually correct movie because facts get in the way of the story and that can't be allowed to happen.

This is a lengthy but good analysis from Salon:
The Real Story